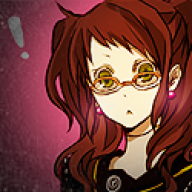 Actress/Healer in Persona: Icebound · 29 · From Nix