Keyblade Knight 1st Class said:
What's with Brother's unhealthy obsession with Yuna? He does realize that she's his cousin right? And that's not even mentioning how inappropriate he can be towards his own sister.
Click to expand...

In Japan, it's legal to marry your first cousin and is not frowned upon in the slightest (Shelbyville Manhattan would be proud). This contrasts how it is seen as incest in the west given the relative closeness in genetics. That's why such an emphasis is placed on finding someone outside your immediate family, to avoid inbreeding.
Here's an educational video related to the topic.

I clicked on this thread expecting to see Tifa showering and am very disappointed in all of you.

So many Cids, but which one is the real one?

kaseykockroach said:
I clicked on this thread expecting to see Tifa showering and am very disappointed in all of you.
Click to expand...

In Final Fantasy II, Guy can speak beaver. What is the language of beaver exactly? How translatable is it?
G

Perkilator said:
I wonder what other base game content FF could've gotten in Smash Ultimate in an ideal world, even if it was mainline games only?
Click to expand...

FFIV has often been considered to be the most popular Final Fantasy outside of FFVII. I could see Cecil (Dark Knight), Cecii (Paladin), Kain or Golbez as fighters in an ideal world. FFVI is another game that is fairly popular on the SNES systems as you can feature Terra or Kefka as fighters.

That's cuz she takes after her mom Tifa.

That's cause she isn't. I've played the OG FFVII and I remember Barret having adopted her some time before the events of the game.

Considering that Materia is sold at many shops & not for all that much for at least the basic stuff, it's surprising that not literally everyone in that world is rocking a couple at all times. You'd think every infantryman would have magic if not the civilian population.

Then again, I also wondered the same thing in Bioshock Infinite.

Jecht's still a terrible dad after becoming SIN judging by all of his spawn I've killed so far.
G

Yu Yevon is the real antagonist of Final Fantasy X as he was the one who started the evens of the game as well as kept upp his scam with his daughter.

Cloud is the protagonist of FF7. Mega Man 7 had a boss named Cloud Man & predated FF7 by 2 years. Weird coincidence. 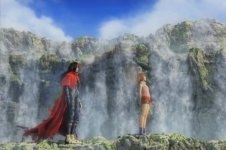 Remember the time that they tried to hook Vincent up with a Loli? Unfortunately I do...

I wonder if Cloud was one of those infantryman who used the guard dogs.

It would've been a cool angle for Crisis Core to explore.

I've decided to renew my series playthrough. Originally I had planned to do them in release order but I've decided to skip around. I'm considering doing the PS2 trilogy right now (X, X-2, XII) or maybe doing the XIII trilogy since I never did play Lightning Returns back in the day. Lots to think about. I want to save IV-IX for last though since that's considered the peak. Also, XVI looks awesome.

I'm hanging out with Aerith in FF7R and Nojima-san is giving the shippers massive content to play with.

I wanted to spend more time as a merc lol. That aspect would've benefit from an open world structure.

I'm liking the remake approach so far and hoping other games pick up this trend like Jak and Daxter, Sly Cooper, Devil May Cry, Ninja Gaiden and Kingdom Hearts.

Ff8-2 and FF10-3 would be nice. They'll probably get remade like 7 but I rather just get a sequel instead.

What if Shinra and Umbrella had a merger?

I feel like Zack and Cloud should be older during Crisis Core.

I hope FF8 gets the remake/compilation treatment.

@MATGSY
Hojo would join the evil scientists club but fight Wesker and Birkin for the top spot.