Hello everyone in the Creative Media. Well as you all know, I have been all about my story, [ Astonished / Amazed ].

Either designing character arts related to the material and some pin-ups and promo images. So, I decided to make a separate thread for it.

I'm also here to announce that a visual novel of [ Astonished / Amazed ] story is currently on the works. And no, it's not a dating sim (okay maybe I'll incorporate in a later date through story routes). I don't have a team to work on it, I'm just one man working on this project. With a little luck, hopefully I should get the first chapter of the VN up within the year. ​
The Characters So Far

Walter, the main protagonist of the story

The SA Brigade Club (so far) 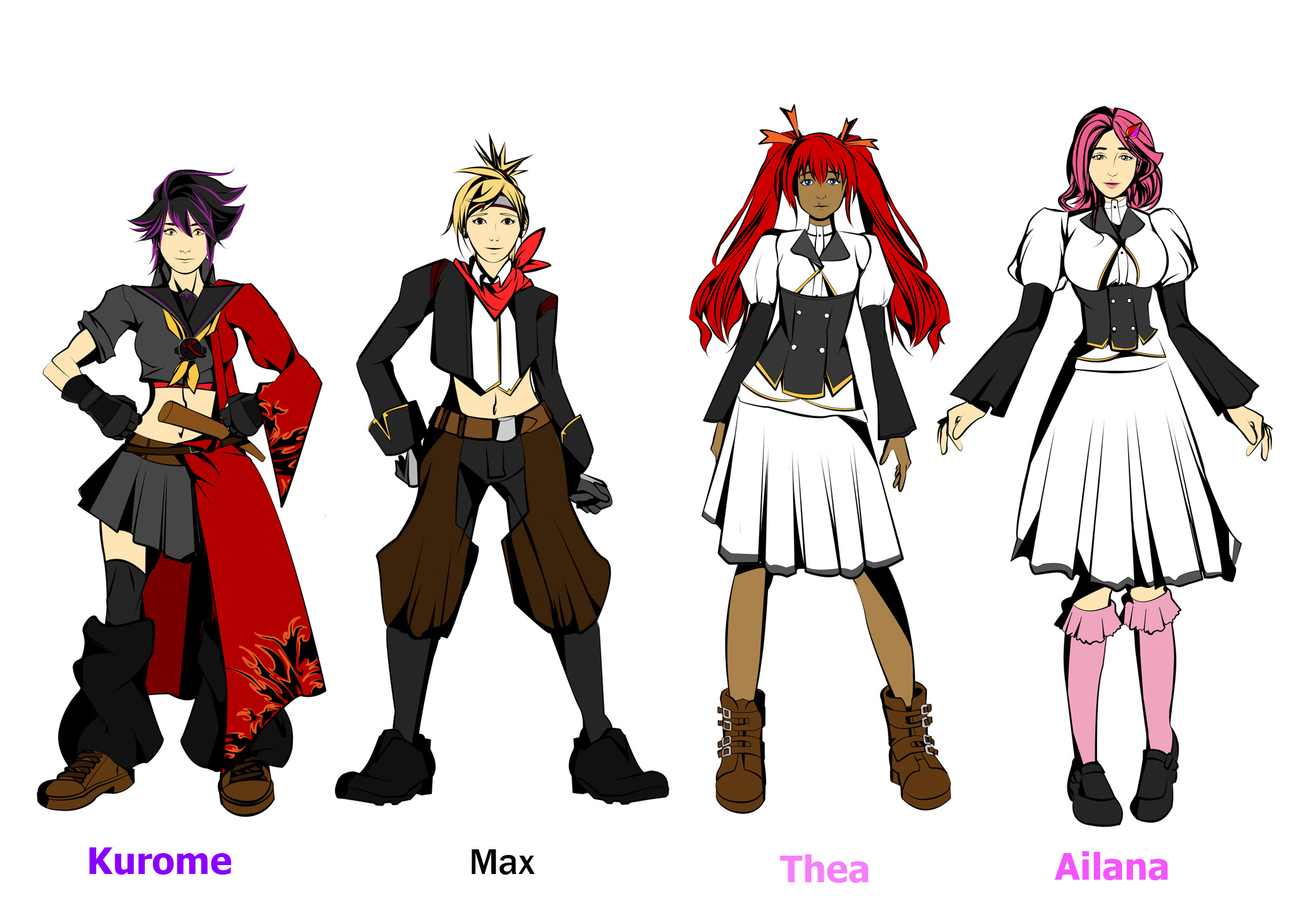 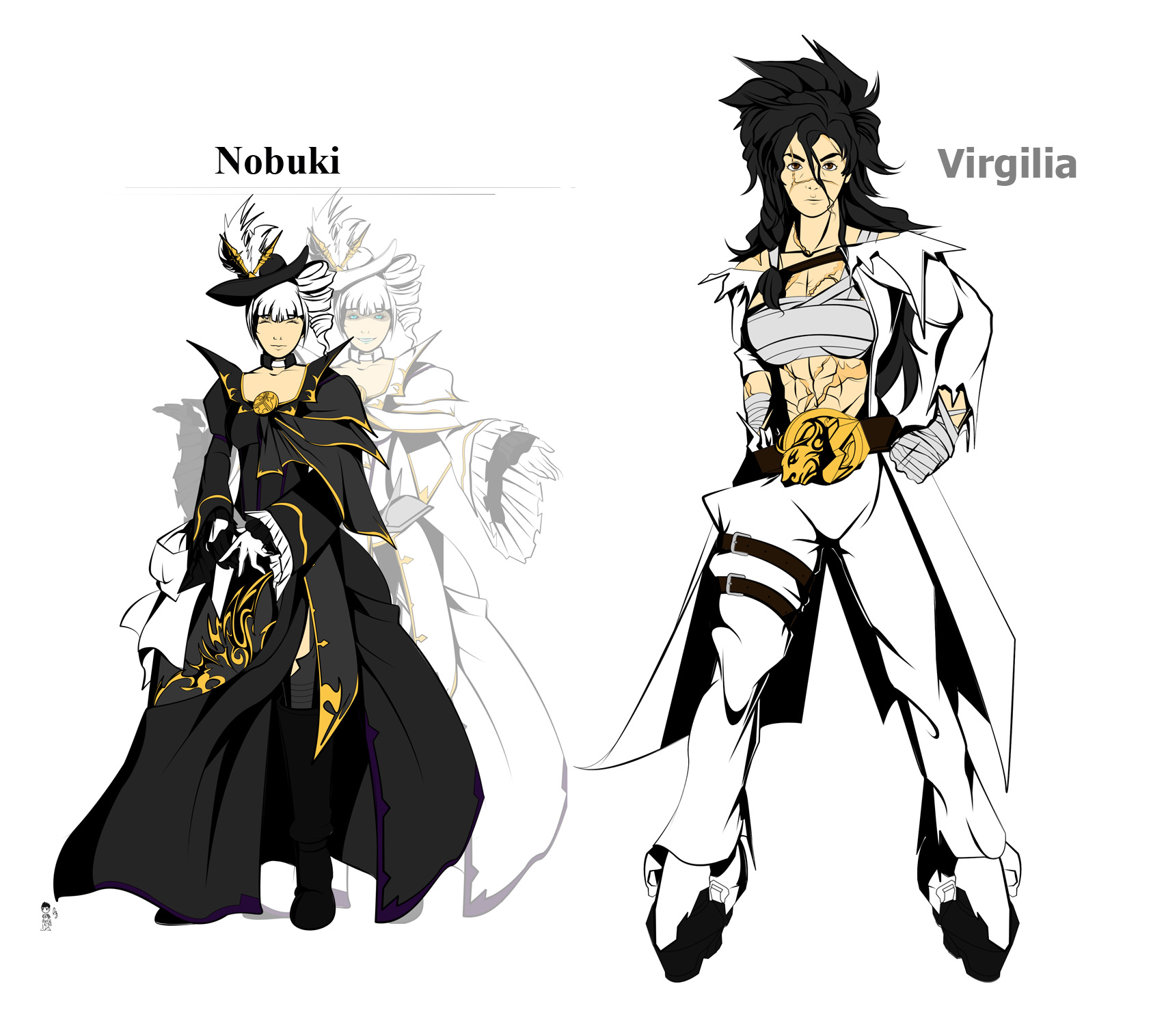 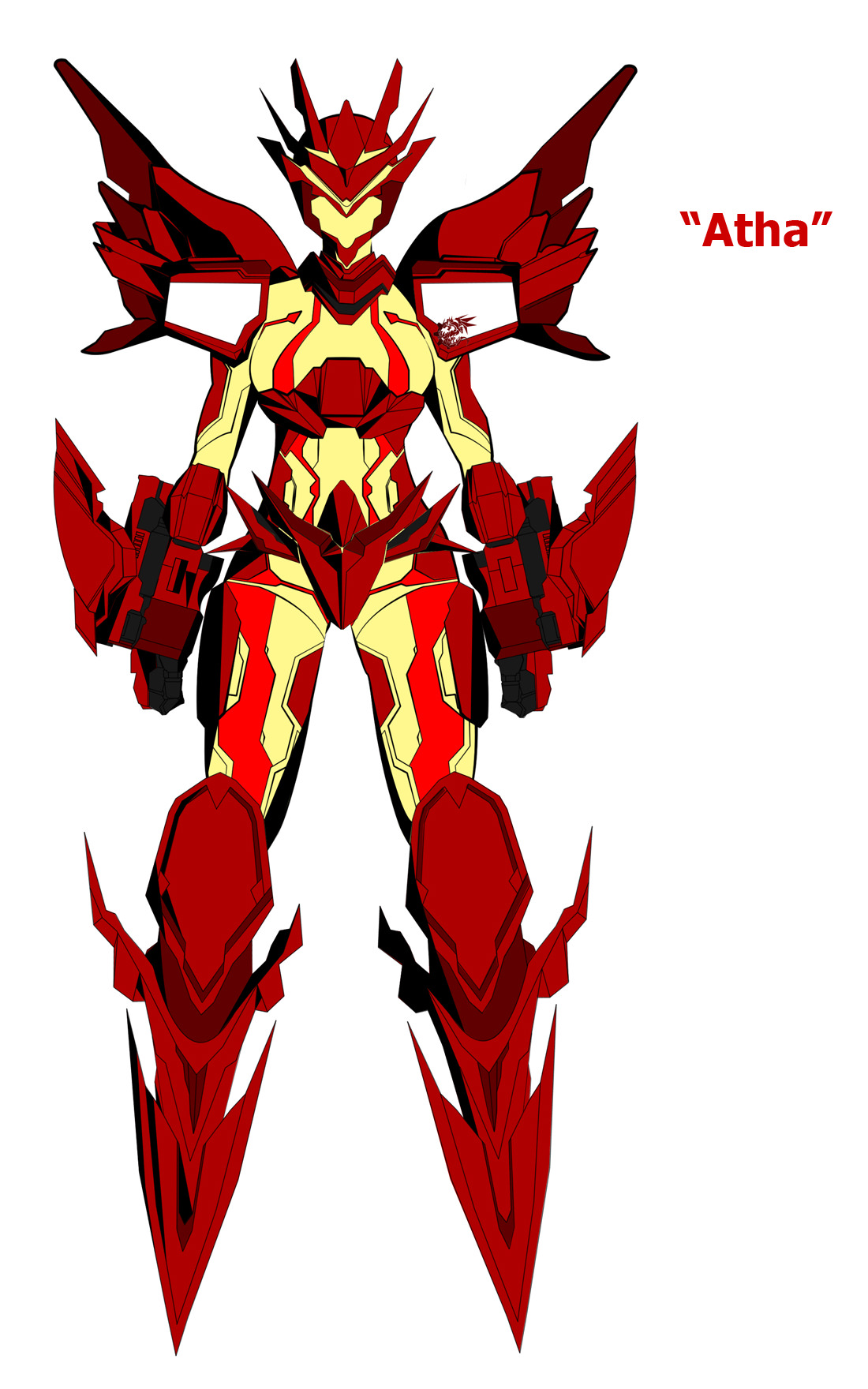 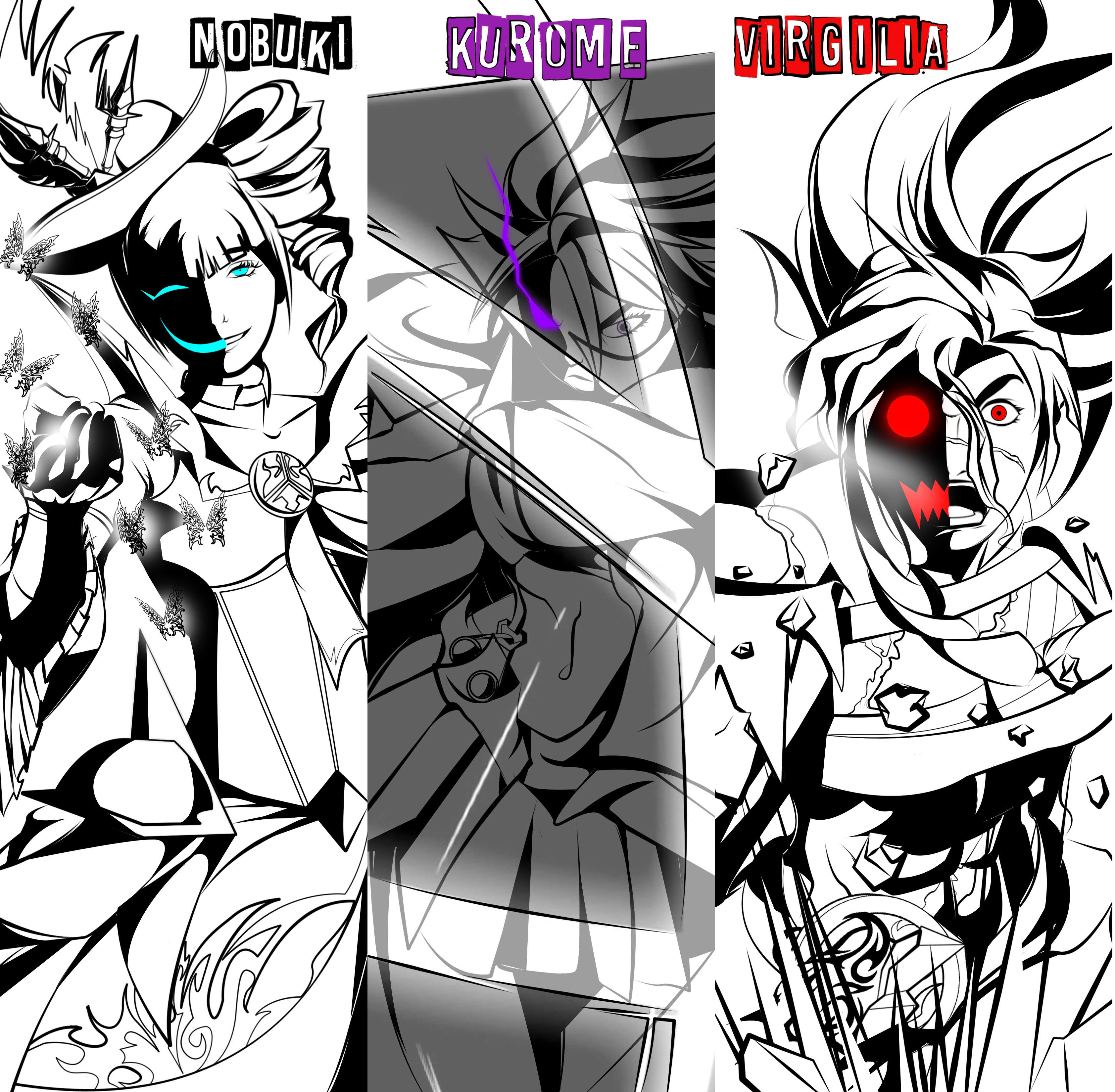 Oooh... a visual novel, you say? What are you gonna use for it? Ren.py or TyrannoBuilder or others? I heard it takes a ton of scripting to make one.

Tsuyu Tsuyu said:
Oooh... a visual novel, you say? What are you gonna use for it? Ren.py or TyrannoBuilder or others? I heard it takes a ton of scripting to make one.
Click to expand...

Oh sorry for the late late response. Yeah I'm currently working on it on TyrannoBuilder since it just require less scripting. I'm not that good with coding and I have tried Ren.py but to a failed extent. I found TB to be more suited in my taste, and it's more user-friendly.

Anyways, here is the official logo for the SA Brigade of the YSU. 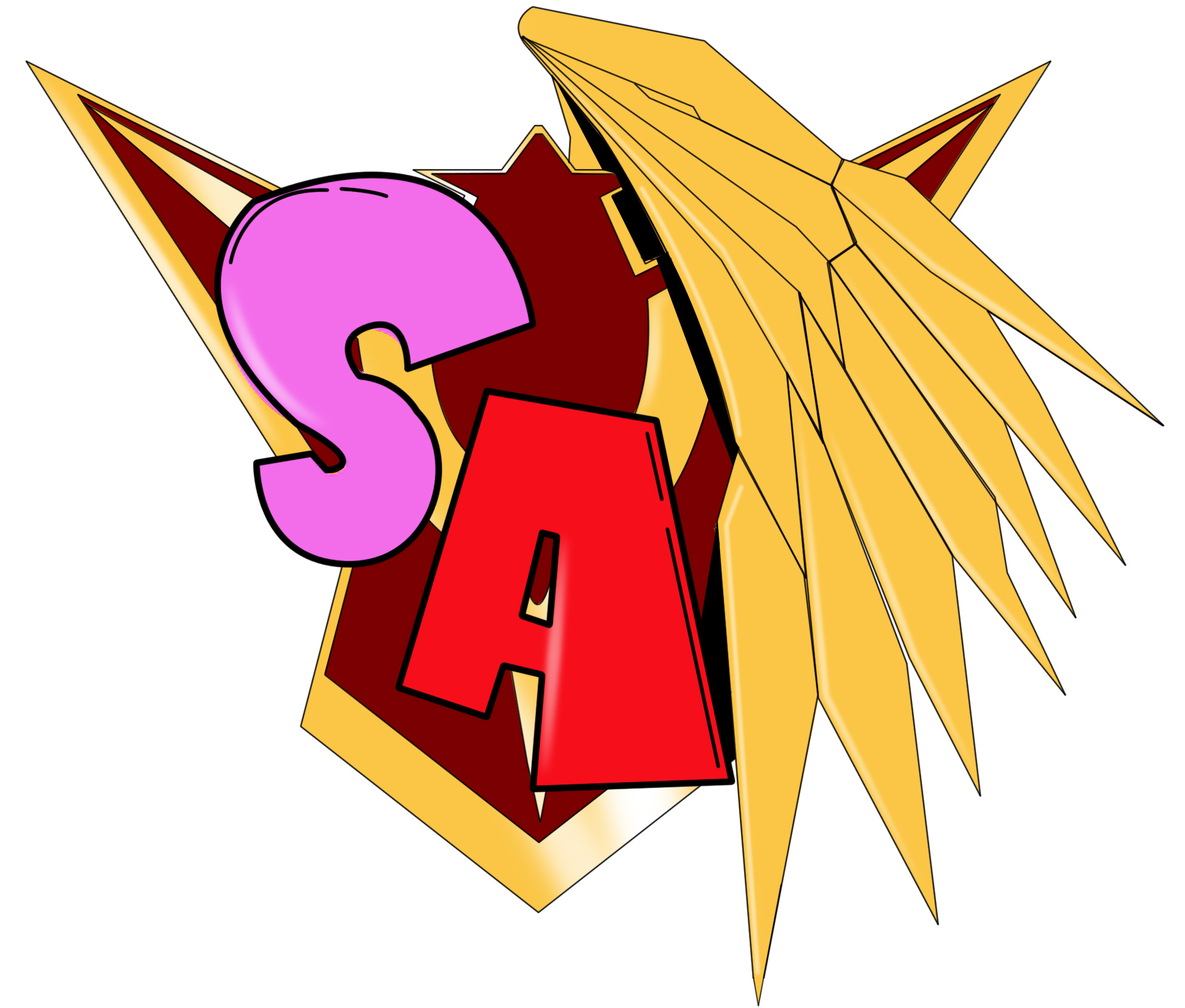 I still don't know if this would be the final, but I'll work on it. The "SA" in SA Brigade stands for "Super Awesome" according to Kurome.

Daaang those look great, good luck!
A lot of that art looks amazing! I really like Nobuki's design!
A

My only gripe is, do you really want to use Tyranno Builder? Your screenshot above doesn't look like it's HD and in this modern world where HD is everything it might not compete well I think. I would hiiighly recommend RPG Maker MV, they just released a tool that makes it much easier to make visual novels, and of course you can make battles as well. It's initial release was a memory hog and had some issues but I think they've really made great strides in their recent updates, and you could have what you make run in browser and possibly even be portable to android.

Howler said:
Daaang those look great, good luck!
A lot of that art looks amazing! I really like Nobuki's design!
Click to expand...

Thanks for the feedback . Yeah I have been getting that a lot on Nobuki, I think I went overboard with her design but I like how she turned out.

My only gripe is, do you really want to use Tyranno Builder? Your screenshot above doesn't look like it's HD and in this modern world where HD is everything it might not compete well I think. I would hiiighly recommend RPG Maker MV, they just released a tool that makes it much easier to make visual novels, and of course you can make battles as well. It's initial release was a memory hog and had some issues but I think they've really made great strides in their recent updates, and you could have what you make run in browser and possibly even be portable to android.
Click to expand...

Umm... the image above is not a screenshot. It's a mock-up I made in photoshop, not the actual thing.

So far I am making progress with TB, but I am considering any other tools. I didn't know that the RPG Maker has such a thing, I'll consider it for comparison. 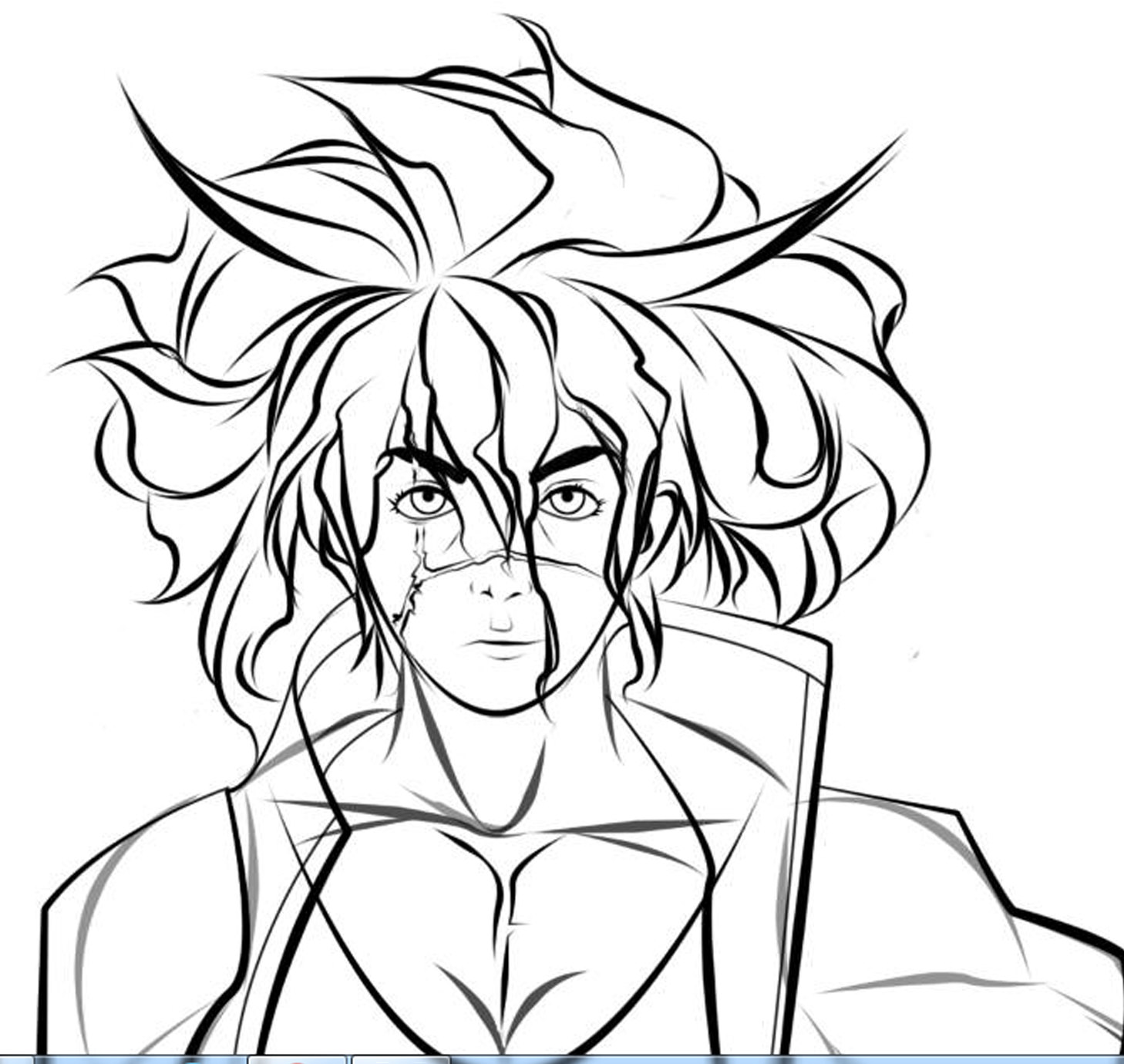 New work in progress, rework of Virgilia or Vee. (If you read the latest chapters, she's the main character of Virgilia's Letter) Now with more floof! She's a lettuce gal now. 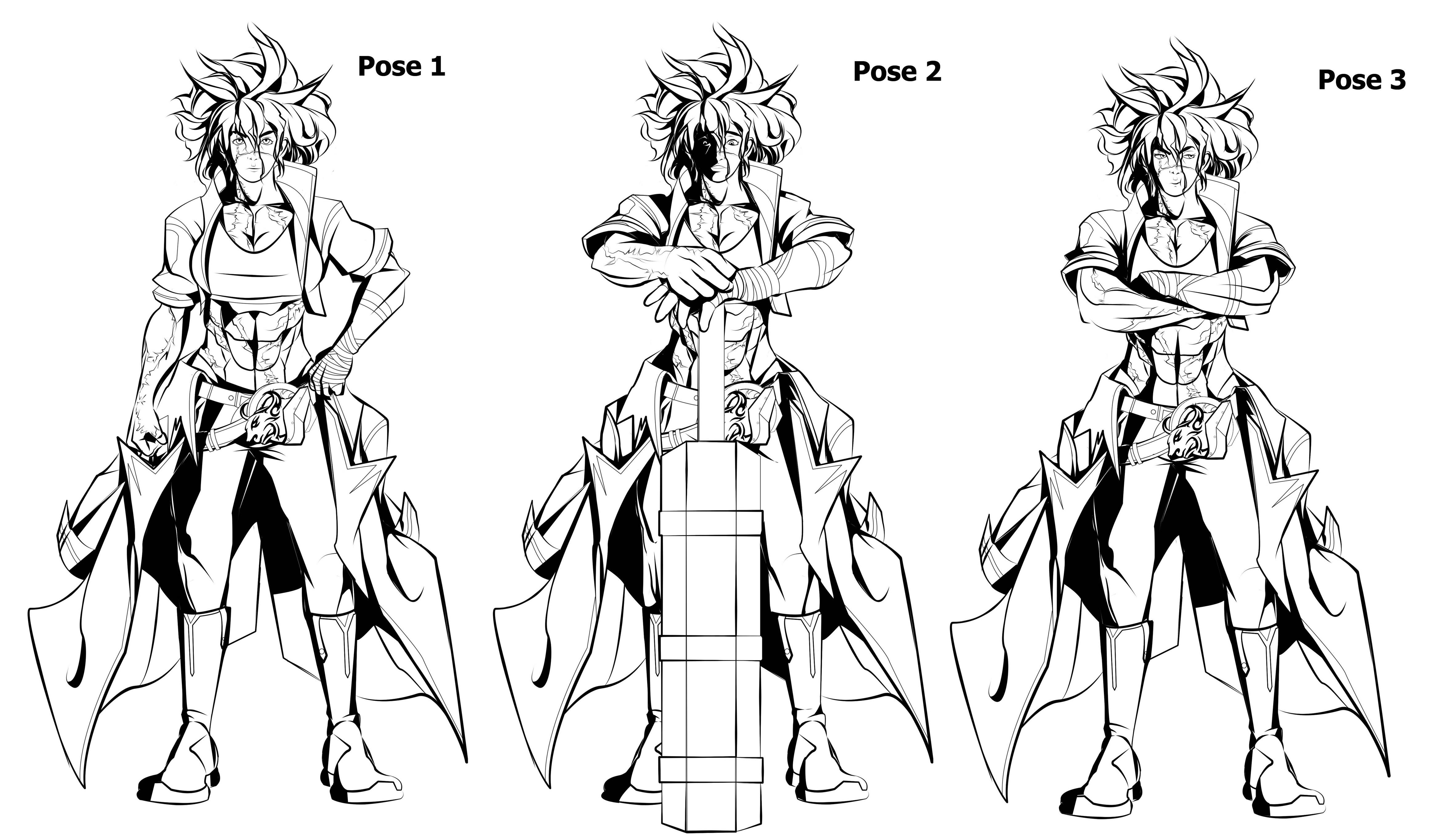 
I've made her more ragged, her scars and muscles more profound. Like badges of honor, I would like to depict her more flaunting her scars instead of hiding them. Fancies herself a modern battle-worn warrior, beauty and grace are for chumps! So she says.


Also the poofy hair, my own personal touch. Also the main inspiration was Monster Hunter's Teostra, hence the horn-like ahoges on the front and the fiery-like wavy afro that looked like a mane.
Last edited: May 8, 2018 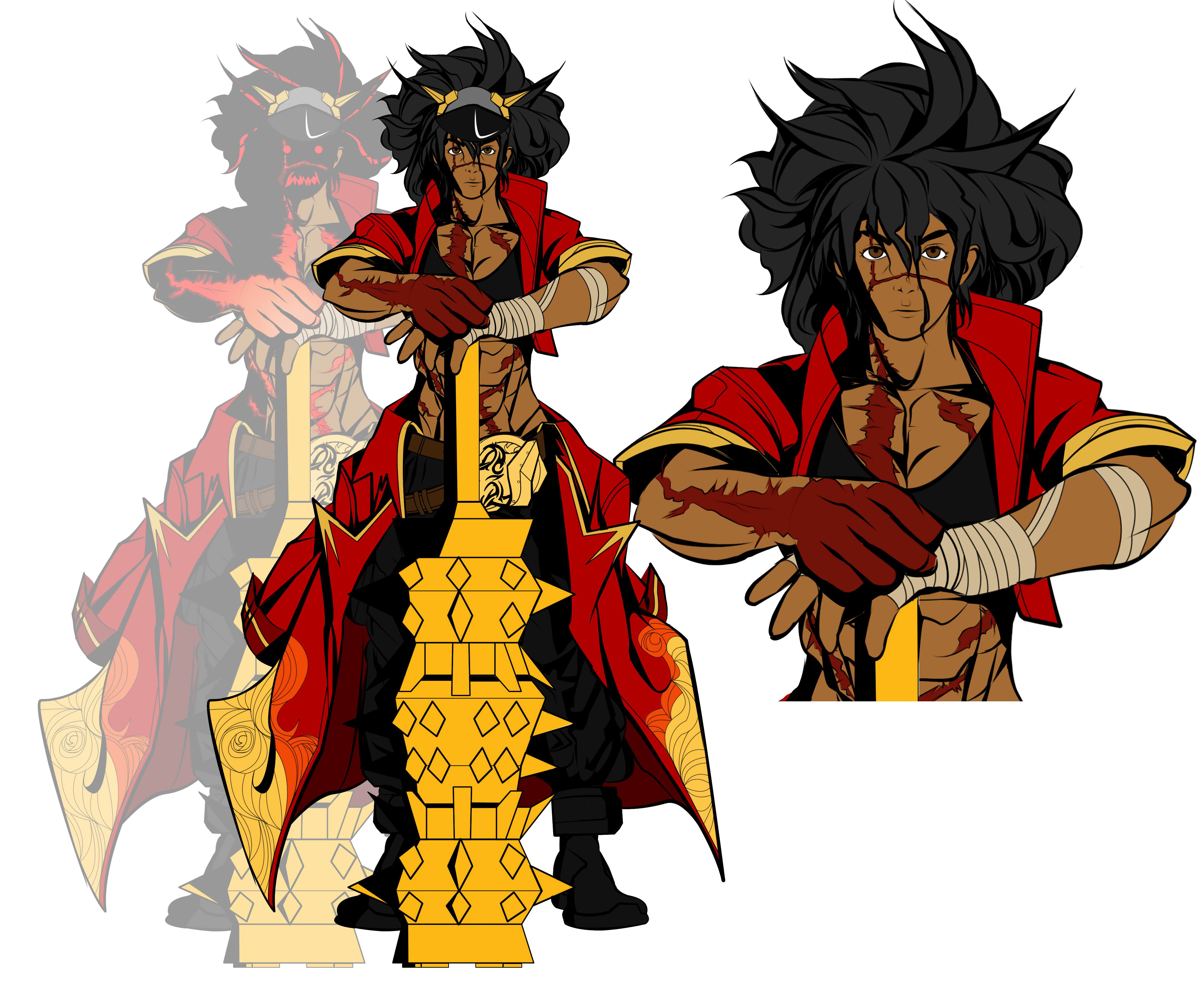 And here she is, the final for Vee/Virgilia De Lune's redesign. I figured I should have her skin dark tanned because she's the outdoor-sy type. Also taking inspiration from Japan's Gyaru subculture, the Ganguro, basically a rebellious trend of fashion in Japan during the 90's which featured dark tanned skin and make up. Although without the Make-up for Vee.

As you can see, given her Spanish heritage, I chose the color scheme based off a Spanish Bullfighter or a Matador. Given also Vee's Bull motif as a symbol of fortitude and fury. You'll also notice the scars are more pronounced and warped due to the fact that her body becomes like a furnace when unleashing her Nexus Energy. She has lost her healing factor, to compensate, She uses the heat generated by her body to cauterize her wounds close. 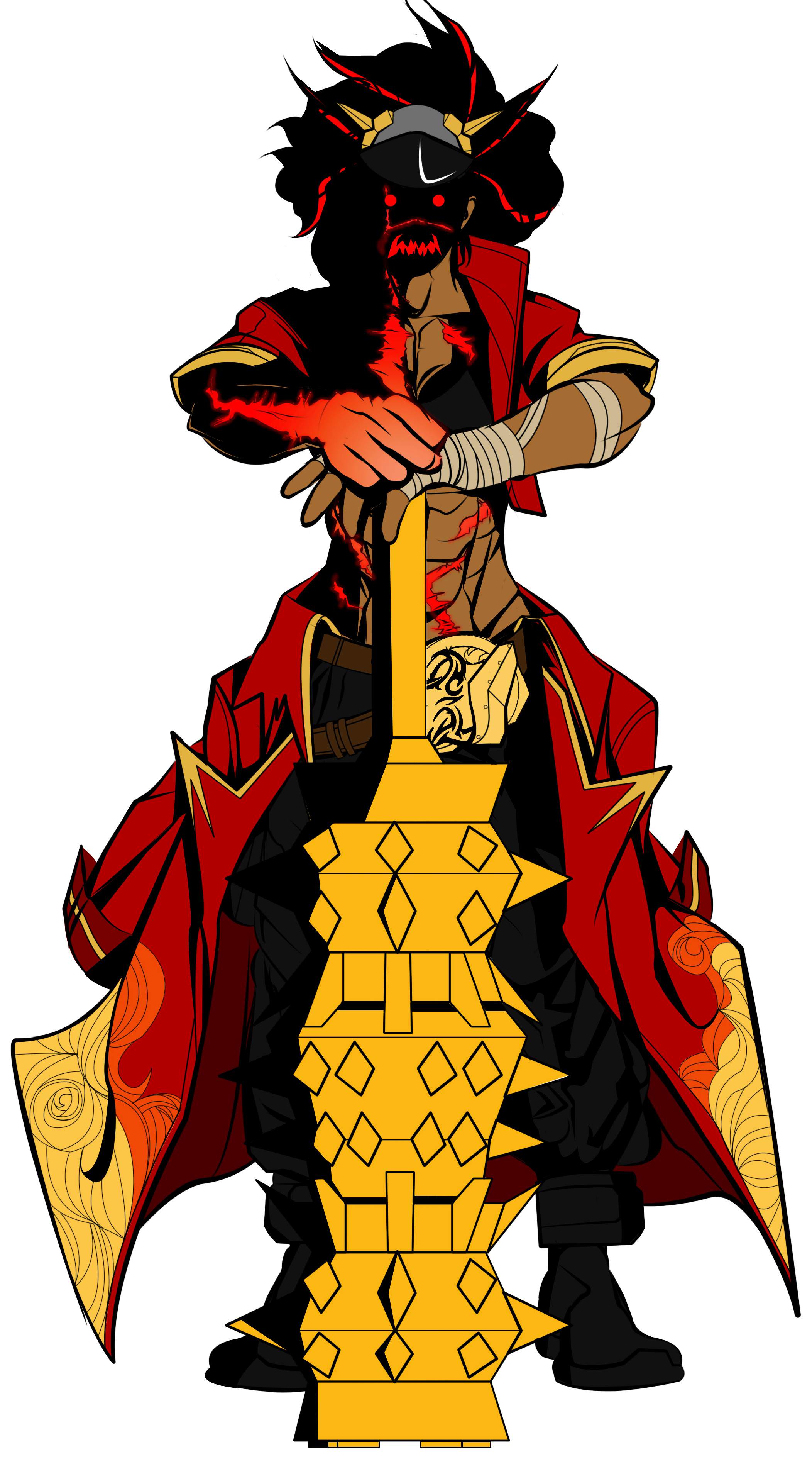 This is Vee's rage mode, the La Ira form. Ira being a Spanish word for Wrath or Anger. In this mode, her body gets so hot that her scars light up with a white hot haze. In addition, she can generate heat energy that is comparable to a volcano; she basically becomes a walking iron furnace. Taking on the vestige of an Oni, a malevolent entity of Japanese Folklore. 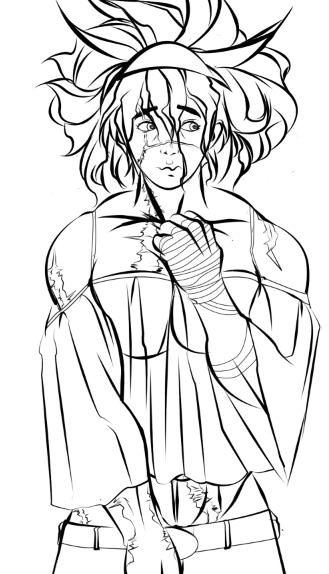 Last WIP entry on Vee's rework. Of course, like last time, she needs to have her girly side stand out every now and then. Will be coloring it next, then we move on to the next character spotlight. Virgilia in her more girly side. Her presence may scream blood and thunder, but by the end of the day, she's still a woman; a shy and a klutzy girl. It's not everyday someone gets to witness her most vulnerable side, only for Walter and her friends. 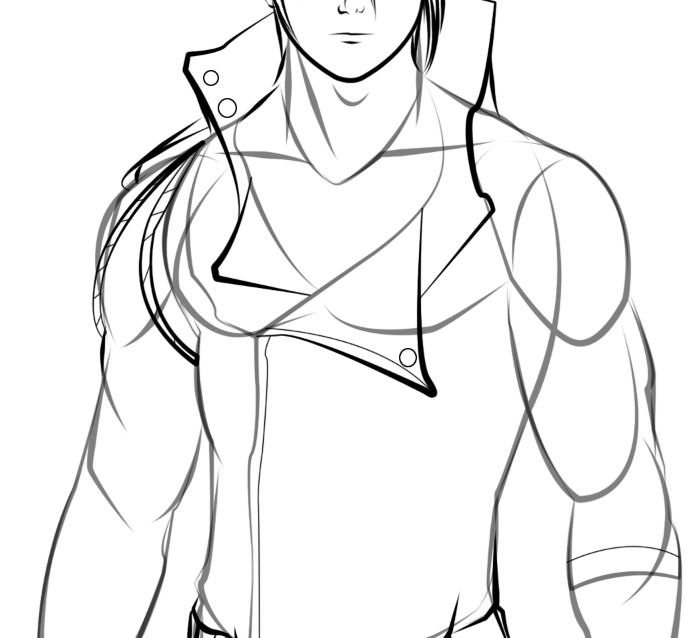 "Are you friend or foe...? That is the question you will answer through your decisiveness."

New character entry under way! After many months of procrastinating about this particular character, Kurszt Schwarz is finally a work in progress.

Going by concept, I imagine he would be like the strict and broody enforcer of the SA Brigade. The Soldier 76 or The Reaper in persona, he would be the grizzled veteran superhero among the club as the alter ego Ironclad; at least until Galil's arrival.

And being an enforcer, he'd be armed with padded gloves and boots and a "really cool jacket" (which Walter takes note of). 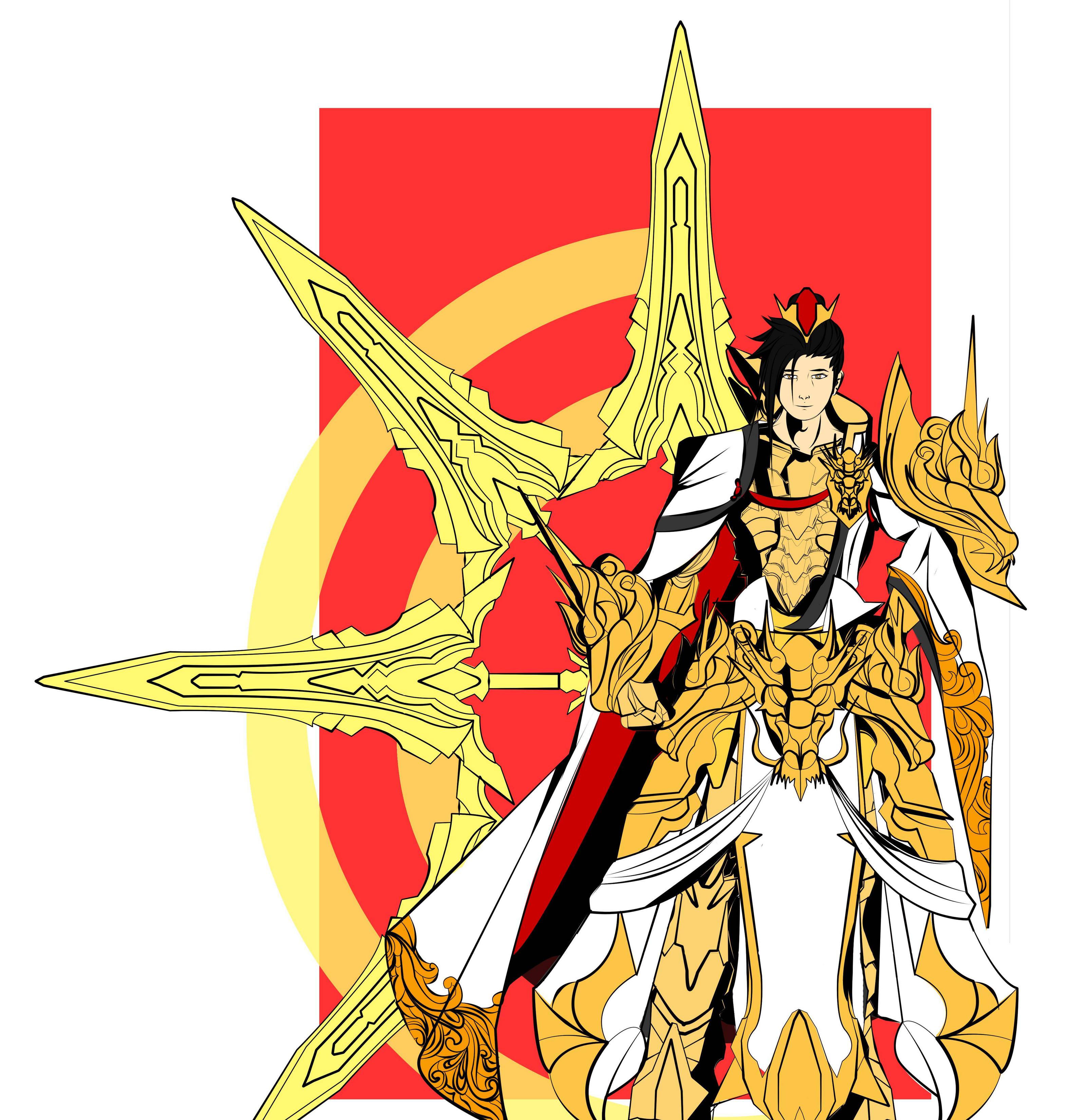 The first known being to have wielded the Mantra in Earth in the ancient times. Having lived for thousands of years, he has ruled and sired many ancient kingdoms all over the world as a benevolent godly figure.

He had also had taken many names, he was known first as "Gilgamesh" by Babylon, "Xuanyuan Huangdi" or the "Yellow Emperor" by ancient China, "Emperor Jimmu" by ancient Japan, "Akhanaten" by Egypt and many others.

His true name was lost in time, but he was always regarded as The Golden Ancestor, akin to his resonating presence that shines like the sun.


Hailing from a bloodline of German Knights. A former apprentice of the Gray Knight as the superhero sidekick, as Iron Squire. Prior to emerging as a Novus, he was the role model that all kids look up up; cheerful, optimistic and with a smile that always gets through the tough times.


But eventually, an un-foretold tragedy would fall upon him that changed his life forever. Ever since the aftermath of that unrecorded event, he lashed out to his mentor and father-figure, the Gray Knight and set upon a path of his own; donning a new identity as the superhero, Ironclad. His usual cheery self is now lost forever, he is hell-bent on the path to eradicate supervillains and Anomalus.


It was unknown how he met Kurome, but she became one of the few whom he truly trusts. Together with Xiu Qiang and Kurome, they formed the SA Brigade club. With him being one of its founding members and an unwanted rival of Walter, as Walter himself used to look up to him as Iron Squire.


The two would often butt heads, but Walter wished nothing more than to get along with his idol. The expressions sheet for Kurszt before I work on a new entry for the project.
S

Kurome's design has a few familiar features to Ryuko from kill la kill was that your inspiration for them?

Shinra said:
Kurome's design has a few familiar features to Ryuko from kill la kill was that your inspiration for them?
Click to expand...