Worlds of Kingdom Hearts | Let’s talk Lightyear, Luca, and everything else!

I’ve just noticed, Pooh’s Grand Adventure is listed as a movie that hasn’t been represented.

Wasn’t that movie the inspiration for the cave mini game in KH2?

I'm actually surprised that someone's yet to talk about the latest upcoming Pixar movie! Has everyone ever wondered about Mei Lee's potential as a party member if Turning Red was made into a world for a future Kingdom Hearts title?

I'll tell you one thing mates, I think she makes a FUR-TASTIC party member material, what with the ability to transform into a Red Panda through powerful emotions. I know this movie isn't coming out until at least next year and we don't know the full story to it, but it looks pretty promising so far! The thought of Mei's ancestors having strong connections to Red Pandas is a quite clever concept that Tetsuya Nomura can utilize for a Kingdom Hearts-esque narrative! I can already imagine Mei in her big, fluffy Red Panda-self wrapping Donald Duck in a spine-snapping hug! XD

Plus, with the premise of the movie set around emotions and anxiety, I think the Unversed and Vanitas would definitely play the role in that world, just like how they did in Monstropolis, where they harnessed the power of screams (Fear and sadness) to gain control over the Monsters Inc. Factory!
Last edited: Nov 30, 2021

There are so many recent Disney films that make me wonder how they might've been implemented if they'd been out back when the series began. Frozen, for example, relates so well to RIku's story, but by 3, most of that story has already passed. Moana likewise would fit perfectly in KH1 considering its story about darkness taking over the world because Te Fiti's heart (the world's heart) had been stolen.

And now Encanto, which I feel like would have fit well in 3. Or, you know what, it would've been perfect for 3D. Spoilers:

Spoiler Show
Considering the movie is set in a mystical place that appeared out of nowhere to protect the family from danger--sounds like something that would've happened to a world during the "apocalypse" of KH1, it became a sleeping world before the Heartless could overtake them. Then there's Bruno's power of prophecy and how that could've been related to the time travel perhaps? Like maybe he looks into Sora's future and sees something undecided about how the 13 v. 7 battle ends being dependent on Sora's own actions--how he chose to use the power of waking. All that and also...the colors of Mirabel's dress remind me so much of the Dream Eaters. 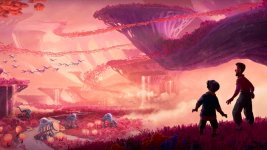 Just a single piece of concept art and a vague description and I can already envision this being a great world for Kingdom Hearts. If I had any artistic talent, I would redraw this with KH characters, some Heartless and maybe throw in Kingdom Hearts itself for good measure. But alas I sadly do not.

So, you know how uncanny valley The Caribbean got in KH3?


Well last night, Epic put out a playable tech demo for Unreal Engine 5 based on the Matrix &....... gee golly:


They could go 'effin' nuts with future live action based worlds now.

Keyblade Knight 1st Class said:
View attachment 14643
Just a single piece of concept art and a vague description and I can already envision this being a great world for Kingdom Hearts. If I had any artistic talent, I would redraw this with KH characters, some Heartless and maybe throw in Kingdom Hearts itself for good measure. But alas I sadly do not.
Click to expand...