Have you ever seen a video game villain who looks so ridiculous, you can't take them seriously and/or laugh. I saw a thread on this somewhere and decided to make one here. I'd prefer people to look at said thread and pick some fresh fashion rejects. Also refrain on KH villains here.

Anyone could not ever take a villain seriously because of their character design?

Voyager from Xenosaga Episode 3. Like what in the fucK? I just cannot take this design seriously. It's some humanoid stereotypical grey alien as a JRPG villain. It just looks jarring and out of place despite the game's setting. Not all aliens have to look like that. Taking the grey alien...

General Tsao (yes he's named after Chinese food) from Sly 3. He's supposed to be a loathsome misogynist (he is) but he's still a chicken wearing armor. Sly Cooper is a cartoonish platformer and childhood favorite of mine. There's plenty more I could mention from that series (Sir Raleigh, Toothpick, Don Octavio and The Grizz come to mind) but most are more comedic. 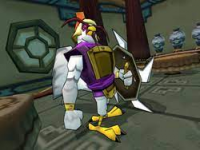 Wolf Hongo from Die Hard Arcade. This terrorist leader looks like a cross between Heihachi (Tekken) and a mall Santa Claus. The subpar voice acting makes him even harder to take seriously. The game itself is a fun 3D beat-em-up from the 90's.

Demigra's transformation from Dragon Ball Xenoverse. Dragon Ball villains can look ridiculous but this guy takes the cake. He goes from a demon sorcerer to a goofy looking dinosaur. 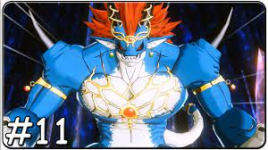 The King of Worms (Atop the Fourth Wall). I know that's a webshow by a former Channel Awesome member but I felt like I had to mention it. The King of Worms is supposed to be a Lovecratian horror with the "Face of Fear". When he finally shows up, he looks like a Power Rangers villain (though that part might be intentional) wearing a silver smiley-face mask and doing a bad Bane impression. I cracked up when he first appeared but love the cheesiness of the design. 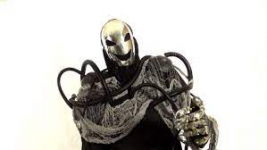 Honorable mentions (they were included in the thread) include Kuja (FF9), David (Killer is Dead), Seymour Flux (FFX), Shielbert and Sordward (Pokemon Sword and Shield), and a dozen others.

Jasper Blatt Jr. where does one even begin?

I looked up Jasper Blatt Jr. and wow, you're right. I've got a few more.

First is Koldan from Tattoo Assassins. The whole game is So Bad Its Good but this guy is no exception. He looks like a Mortal Kombat version of DSP/The King of Hate (a very notorious, incompetent, and obnoxious Let's Player) with claws. Physical cabinets of Tattoo Assassins are very rare (only a handful exist so most use emulation). 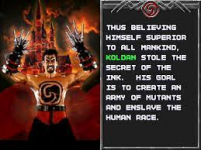 Next is Shadow Okumura from Persona 5. I love that game but some of the villains do look a little silly. This corporate executive has a sci-fi theme that brings to mind Daft Punk. There's also that fish bowl. 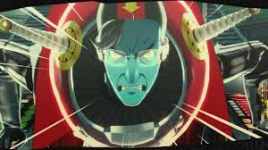 Survival Arts is an embarrassment to fighting games and Dantel (the main villain) isn't helping. To directly quote TVTropes, "The resident SNK Boss has been likened to a cross between Will Ferrell and Richard Simmons pretending to be a hybrid combination of Shang Tsung and Amakusa." Sammy should be thankful to be associated with Blazblue ... 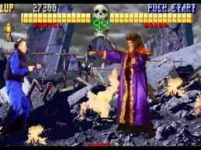 Ok so this guy:

Polygon Man. Originally created as a tech demo for the PS1 way back when, he resurfaced years later as the boss of Playstation All-Stars Battle Royale. So first off, we already got ourselves some red flags just for the mere association with that shitty game. But he manages to sink even lower by somehow being the game's weakest character. Yes, the boss in a fighting game is the weakest character. That's a special level of failure right there. See in PSASBR, opponents can only be defeated with super moves, all other attacks simply serve to fill the player's super meter (this was naturally a really dumb design that doomed this game but I digress).

But Polygon Man was the exception. Due to how the fight plays out, he can't ever be hit by Supers, thus he ended up being the sole character in the game who is damaged & beaten with standard moves! Oh, but it gets even sadder. Because he happens to lack any super moves of his own. Yep, he is physically incapable of ever killing the player! The actual "challenge" comes from his minions, who do 99% of the fighting for him. Polygon Man is just a mild distraction in the best case scenario!


WTF does that opening line even mean?!

Like people shit on SNK bosses for being too hard but at least they're doing their job unlike this doofus! The Tech Demo T-Rex in Astro's Playroom was basically Polygon Man done right.

EDIT: OK, so this post wasn't really about his appearance being what's laughable about him but rather his ineptitude.
Last edited: Jul 21, 2021