What Games would you like to see remade for Current Gen Consoles?

It's due time that Sly Cooper comes back

A remake for Klonoa: Door to Phantomile

Croc: Legend of The Gobbos could benefit a full on reboot

other additions would be Chocobo Racing, Banjo - Kazooie

A full on reboot on Gex: Enter the Gecko. Honestly, there's quite the potential with this title.
If given the rewrite treatment.

Ugh, I'd have to honestly have to go with a GOOD Star Wars Battlefront. Choose your class, capture the flag, expand your world etc.

Alpha Baymax said:
Oh, I'd love that. Naughty Dog seemed to have moved past Jak and Daxter but I'll happily take a Bluepoint Games remake.
Click to expand...

I still have faith that one day, the franchise will be brought back, and it'll be a labor of love! <3

Give Zack some love . Replace Genesis with Deepground from Dirge of Cerebus. Also add a evil ninja clan from Wutai to make it ironic.

Zack will fight an evil version of Cloud's future allies .

Donkey Kong 64. It's become infamous in recent years and could really use a remake so that stuff like this is less of a problem:
I'm replaying it right now, I still enjoy it, but it has a lot of room to fix and trim.

Unrelated to the thread but I'd love a new 3D Donkey Kong game. Just keep the sequel simple with only a playable Donkey, Diddy, and Dixie with less trinkets to collect.

I will always remember that a key person involved in Before Crisis said that they were watching the Nintendo 3DS very carefully in regards with porting/remaking BC for that platform.

It's been years. I very clearly remember that interview. I remember spamming it on GameFAQs back in the day xD

Metal Gear: Ghost Babel but with Liquid Snake as the protagonist. Ghost Babel was a non-canon spinoff for the Game boy advance. It's a run of the mill Solid Snake adventure but putting in a preMGS1 Liquid Snake could spice it up.

Xickin said:
Ugh, I'd have to honestly have to go with a GOOD Star Wars Battlefront. Choose your class, capture the flag, expand your world etc.
Click to expand...

I wish they would just re-release Star Wars BattleFront: II and be done with it. Their current attempts are trash.

My biggest wish is X-Men Legends. There aren't games like that anymore which makes me sad.

Rodin said:
Metal Gear: Ghost Babel but with Liquid Snake as the protagonist. Ghost Babel was a non-canon spinoff for the Game boy advance. It's a run of the mill Solid Snake adventure but putting in a preMGS1 Liquid Snake could spice it up.
Click to expand...

There's some implications that Ghost Babel was a VR training simulation and you were actually playing as Raiden playing the role of Snake.

Jak and Daxter: The Lost Frontier.

It was a Jak and Daxter spinoff for the PS Vita. It's also the most hated game in the series. It's got some interesting ideas but flawed execution. So giving it a second chance could revitalize the series.

Plus this concept art of Jak works better than we got. 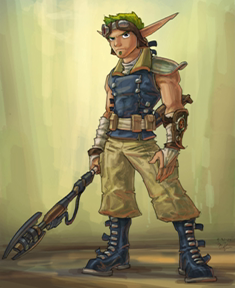 I still feel rewriting with Liquid is a good angle to pursue.
Last edited: Jan 18, 2021

Rodin said:
I still feel rewriting with Liquid is a good angle to pursue.
Click to expand...

Maybe one after the eventful remake of MGS1

A couple of weeks ago I came across this video of Dinosaur Planet, a planned N64 by Rareware that got retooled into Star Fox Adventures on GCN.


A LOT was cut in the transition & SFA as a final product ain't so hot. In particular the original 2 playable characters Sabre & Krystal, with 1 getting reduced to damsel in distress & tutorial level status, & the other cut from the game entirely. Also much of the game's lore was gutted & the original final boss was reduced to a throwaway lesser bossfight to make room for Andross, whose resurrection goes unexplained.

I want a full fledged remake with Sabre, Krystal, AND Sabre as playable characters. All of the SF stuff can be in Fox's campaign where it's given more room to be fleshed out while Krystal's/Sabre's campaigns are closer to their original planned designs.

I Want OOT, Majoras Mask, Twilight Princess and Windwaker on the Switch

We might see a collection of the Wii U & 3DS versions as part of Zelda's 35th.

MATGSY said:
We might see a collection of the Wii U & 3DS versions as part of Zelda's 35th.
Click to expand...

Yep. What we might see released apart is the HD Remaster for Skyward Sword.

By the way, this is Zelda' anniversary month. The first Zelda game was released on February 21st 35 years ago. February 21st of this year falls on a Sunday. I'll presume next week they'll announce a Direct for the other week (even though they usually announce Directs a day or two before release, this is special, seeing as how it's an anniversary one).

I really want to play OOT on the Switch. I tried to play it on the 3DS last year but I really can’t play Zelda on a handheld. I need my pro controller..
And I haven’t played any other Zelda game before so pleeease give me MM, TP, SS and WW too.

I don't want a remake, but a port of Rocket: Robot on Wheels. It's my favorite N64 game by a long shot and I'm forever bummed it's not being preserved in any way beyond N64 cartridges.

One game that comes to mind that is in desperate need of a remake (in my opinion) is the original Devil May Cry.

Several of the fire emblem games that didn't make it over to the west prior to the blazing blade. Seriously, with voice actors for FE heroes given to most of those that preceeded blazing blade, they can do a lot with the older games.