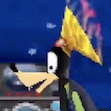 The Dalmatians' house in Traverse Town: the immersion, the comfort, the security, the music... very bittersweet. I love it.

It's also kinda hard to believe that this movie was still relatively new when KH1 released; KH1 is older than it seems.

They should just knockdown Downtown Disney (if that even still exists) and just build a real-life Traverse Town replica... what an unbelievable world: the theme, the mystique... I love the hotel scene and the Mad Hatter shop. If they ever somehow pulled off a KH MMO, this would obviously be a great hub. It feels like a place people could live in, but at the same time it's very isolating and you don't want to be there... indescribable.

Somehow KH3's Twilight Town (while nice) totally fails to capture what made Traverse Town so special; they're kinda opposites imo: Twilight Town is this very small square (which feels even smaller considering how you can run up and down the buildings) with inaccessible interiors. Probably the greatest thing was the projection screen showing Mickey movies in the corner alley... more stuff like that please.

Agreed I feel like the lack of interior locations connected to an exterior map was a bit dissapointing. There were a lot of cute charming places in Travers Town and I think if they gave the indoor locations the love and care they gave places like Twilight Town it really could have shined.

Generally I felt a bit let down with how they handled Twilight Town, we only got the one square and the forest leading to the mansion, we couldn't even go into the mansion and explore it some more.
D

Exploration couldn't be helped. Personally...I forgot what the point of Twilight Town even was in KH3.

KH1: I liked the Dalmatians, the special magic of the game and the depiction of the characters.

Re:Com: I love the way the Organisation was presented. To me, this is not only the game that introduced them, but they were quite menacing - they actually communicated with each other, thus seeming like a real gang, lured Sora in, played tricks on his mind, engaged him directly and had an actual plan of turning him into their puppet. The following games still tried to paint them this way, but it felt way less effective and much more like them appearing in a random world, babbling heart-darkness-yougonnafail gibberish and disappearing again without having a real idea of what they want from Sora.

BBS: I know everyone hates it, but I liked the command board from BBS a lot. I even played it for fun a few times. It offered gameplay value, was easy to learn, didn't require to be tried for 100 times to get a hang of it and I found it quite fun. I also kinda liked the thought of the BBS trio playing a simple game against each other because it was probably the most normal friendship thing they did in the whole game ..

DDD: I really enjoy playing as Riku, especially in this game. Riku is perceptive, sassy quick and fun to play.