The Sora/Alice Fanclub "And It Just Gets Curiouser and Curiouser..."

From the founder of the Terra/Cinderella Fanclub...
...and the Ven/Snow White Fanclub...
...I hereby present to you the next Keyblade/PoH FC...

"And it just gets curiouser and curiouser..."

...okay, so this was really Smile's idea, but hey, I'm not against a cute pairing like this! :3

Reasons:​
1. Alice is the only Disney princess without a Prince Charming, so unlike the other Disney/KH pairings, we're not really messing with canon by pairing her with Sora.
2. And does Alice even need a Prince Charming when she has Sora? Even before they had become friends, he was willing to defend her from the Queen of Hearts and hoped to find her again after learning that she'd gotten dragged off Wonderland by Heartless.
3. They're both cheerful, curious kids who wanted to leave their peaceful (and somewhat dull) lives to pursue adventure!
4. They make a good team when fighting evil, as seen in Chain of Memories. Sora used his Keyblade to defeat the Heartless attacking them, and Alice used her head to keep them out of danger from the Queen of Hearts.
5. In Re:Coded, Alice invited Sora to tea. It's like a gender-role-reversal of Zack/Aqua! 
Toadles said:
*Sora and Alice in the keyblade graveyard*

MX: No....! My precious keeeeeeeyyyybureiiido! Off with her heart!
Click to expand...

So, come, sign up, and join us for a delightful cup of tea with these two friends/potential lovebirds!
Last edited: Mar 15, 2011

Sure I'll join please, although I'll skip the tea. XD

Welcome to the Sora/Alice Fanclub, White-Light!​
In that case, we'll throw you a very merry Unbirthday party instead! :biggrin:

Yeah, Thank You XD
Oh and a very merry Unbirthday to you as well. ^^

Welcome to the Sora/Alice Fanclub, Ethnic Woman!
Come join us for a cup of tea while we celebrate our very merry Unbirthdays!​

No problem... another unbirthday present to everyone!!! ;D

WHOA. That first picture is HAWT. Up until this point, I was mostly thinking about this pairing as cute/silly (like how I ship Ven/Snow White), but I think that picture converted me to full-blown Sora/Alice shipper! I mean...WHOA. It also goes really well with my Reasons #3 and 4. Now I almost want to write an AU where Sora and Alice are these Battle Couple Keyblade wielders that travel the worlds, kick Heartless butt and take names.

The second one is hilarious and adorable, and the third one is just plain cute! :3 Thank you so much for finding these, White-Light!

Now I have Miyu Irino saying "Alice, let's go!" in my head over and over and Alice's VA muttering a small "H-hai..."

Only you KHI, only you. BTW, do you want the Alice sprite images like in the other clubs? At least the ones I run D:
T

You seem quite enthusiastic about these Disney/KH pairings Org 42

*Sora and Alice in the keyblade graveyard*

MX: No....! My precious keeeeeeeyyyybureiiido! Off with her heart!

C'mon, we all know Sora'll make a wonderful white rabbit for Alice to chase. He'd ensure that Sora would have a nice hat for the wedding, and supply lots of tea as well!

I feel rather hesitant to invite the march hare though.... 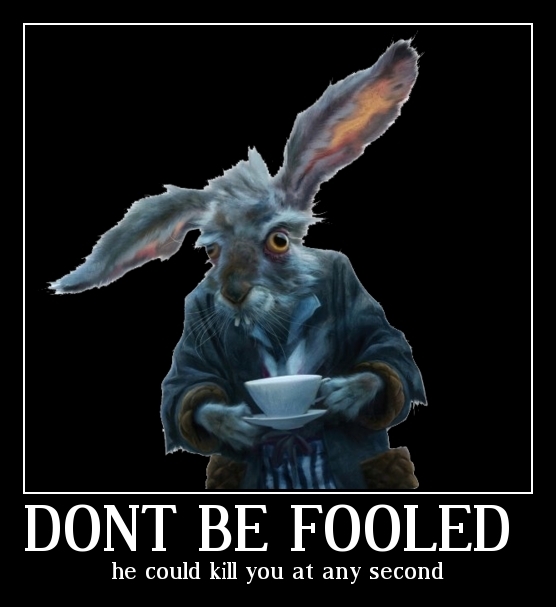 Heh I thought Johnny Depp was the best form of the Mad Hatter yet.

He was truly quite mad.

Anyone notice how Sora's so cool and calm around girls like Jasmine and Ariel but when he's with Alice, he sounds like he's courting her or something?
Not joining. Just wanted to point that out.