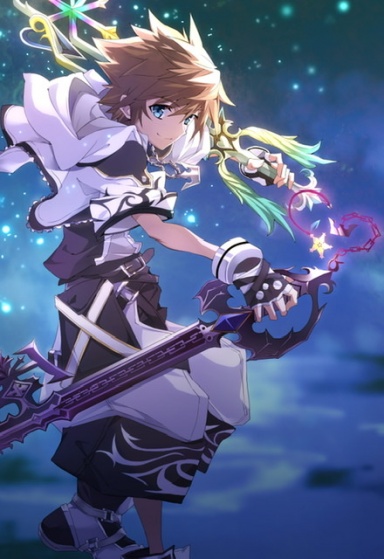 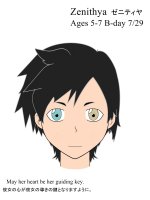 Ps. Yes, I do realize now how much she looks like Brain but it wasn't intentional it just happened. I'm just gonna say she liked the haircut.

I have a huge announcement! I’m making a Fanzine for the keykids and the Foretellers. I made a cut down version of it for a school project and decided to reuse and refurbish it as a part of the Gaurdian Gaidens and Gaurdian Chronicles. It still needs a few edits and a few more pieces of artwork so it’s still in the works. But I’ll be cross posting it here and on a03. It’ll contain character summaries for all the union leaders, Player and their Chirithy, Ven’s Chirithy, Strelitzia’s Chirithy and Brain’s Chirithy, The foretellers, Luxu, Vanitas and perhaps even the master of masters, a mixture of both fanart and official renders and maybe a few extra bits of backstory only canon to the Gaurdian Chronicles as well. Please look forward to it around the spring of next year. My ideas for new outfits for Skuld, Lauriam and Elrena will show up too. Question though I don’t have a twitter but I do have an instagram should I show off the printed version there as well or just leave it here and on Ao3.

Next we have Ven’s second portion from that same story
Ventus
My heart pangs as his statement ripples through my heart and mind, it’s weight contrastingly making my light feel weightless and stronger than ever. It’s power bursting out in a singular embrace catching him off guard as I nestle myself back into his familiar vested button up stating with a newfound confidence, “I’m lucky aren’t I… and she was lucky too. Lucky to have you… Heh it feels funny to admit it but I want her to have that luck back almost as much as you do. I can’t rest on my laurels anymore and I won’t take my previous excuses because I have the knowledge now and have accepted it. But will you let me help you find her again, Lauriam?” he returns the embrace melting within it and nodding before answering “Of course Ven… Of course. We’ll find them all together.” The embrace melts us further and the bliss seemed like it could last forever. But soon enough plushy footsteps alert us to a friendly but unexpected visitor who giggles softly before saying “I’m glad to see you two made up.”
We withdraw as I ask “Chirithy you’re up?”
“Course I am when both of my wielders go missing, of course I’m gonna wake up.”
Lauriam responds slightly sheepishly, “Oh sorry to wake you Chirithy.”
“No worries Lauriam no worries. Curiosity led me here, not your absence. I had faith so I stayed with the others for a bit.”
“Wait so Chirithy how long were you up?”
“Oh not too long I stirred a bit after you left Ven but I fully awoke a bit after I heard your key flash. Thanks for the pets though they sure helped my curiosity stay at bay.”
Lauriam shakes his head but his smile is more proud. As I curiously ask “You heard everything didn’t you?”
She smiles slyly “perhaps but no worries if you two so wish my whiskers are sealed.”
We looked to each other quickly before synchronously saying “Yes please.”
“Gotcha!”
We smile “good.”
A soft silence embraces us for a short while as we once again take in the breeze and the scent of the pines and flowers before Lauriam asks slowly “So… what now.”
“Perhaps rejoin the others.” Chirithy brightly suggests. I shake my head “but it’s already morning there's no point in going back to sleep.”
Lauriam nods agreeably, turning pensive for a moment before saying “hmm what about breakfast?”
Chirithy bounces back a bit “Breakfast? This early?”
“Why not we have a lot of people to prepare for anyway.”
My smile widens “ok I’m game what were you thinking of making?”
“Depends on what you have in the castle. What would you like, Ven?”
“Pancakes… yeah lets make some pancakes.”
He smiles nostalgically “I’m guessing the chocolate chip variety, yes?”
“Yep but we should make some plain too Terra doesn’t really like sweets.”
“Noted, what about toppings and refreshments?”
“Castle’s still got us covered. If you thought the snack stash we had last night was big you haven’t seen anything yet.”
“Should I be amazed or worried, we all know how you get around sweets.”
“Ah don’t worry Aqua will cover that one for you in a heartbeat. Who you should be curious and more worried about would be Roxas, he’s not just Sora’s nobody ya know technically he’s mine too.”
“Fair point, I am quite curious.”
Chirithy bounces “You have your minds made up then don’t you.”
“Yep. Let's get started then. We do have a lot of people to cook for.” I say rushing past the both of them with pep and cheer. I take a right turn but quickly turn back saying “That is not the way to the kitchen.”
A snicker hangs at the edges of his question “Getting turned around in your own castle?”
“No. Just checking if it swapped on us the Castle of Departure changes its layout sometimes at random.”
“Hmm guess that's where Castle Oblivion gets it from.”
“Yeah. It keeps us on our toes, that's for sure.”
You must log in or register to reply here.
Share:
Facebook Twitter Reddit Pinterest Tumblr WhatsApp Email Share Link
Top