THE BROTHERHOOD OF STEEL

The Great War started (and ended) on October 23, 2077 when nuclear weapons were launched by all the nuclear-capable nations of the world (mainly the United States, China and the USSR ). The exchange lasted for approximately two hours, according to most survivors' accounts. Once the last atomic bomb and nuclear warhead had fallen, the world fell into the deep darkness of a nuclear holocaust.

Events before the Great WarThe geopolitical situation that led to the outbreak of the long-feared global nuclear war was prompted primarily by the onset of a worldwide energy crisis when the supplies of fossil-fuels, particularly petroleum, finally began to run out by the year 2050. This energy crisis was in part the result of the ever-increasing amounts of fossil-fuel required to power the Fallout world's larger and less energy-efficient technologies when compared to those of our own world because of the failure to develop miniaturized electronics and more advanced manufacturing materials (see Divergence). The result of this energy crisis was an increasing scramble by all of the advanced, industrialized nations to secure the few remaining supplies of untapped petroleum around the world. Ultimately, a series of military conflicts driven by this hunger for natural resources consumed the planet. The European Commonwealth had reacted to the rapid raising of oil prices to unacceptably-high levels by the Middle East's oil-rich states in 2052 by unleashing military action in that region of the world. This intervention ultimately resulted in the destruction of the Israeli city of Tel Aviv in December 2053 by a terrorist nuclear device and a limited nuclear exchange between the conflict's participants in 2054, the world's first since 1945.

As the United Nations tried with little success to keep the peace, many of that organization's member-states pulled out of the UN, and within two months of the outbreak of what was soon called the Resource Wars in 2052, the United Nations was disbanded. Next, following the breakdown of trade talks and the unilateral American exploitation of the world's last newly discovered reserves of crude oil, the Chinese invaded Alaska in 2066 in pursuit of that American state's remaining oil reserves. The United States ultimately annexed Canada in 2076 to ensure Canadian support for its defense of the Alaskan front even as the American federal government acted aggressively against its own citizens to contain wartime rioting, anti-war civil disobedience and military desertion. The United States retaliated against the Chinese by launching its own costly invasion of the Chinese mainland in 2074 to reduce Chinese pressure on the Alaskan front. Despite initial costly setbacks, this strategy proved successful and American forces liberated the Alaskan city of Anchorage and forced the Chinese people's Liberation Army to retreat entire from American soil in January 2077. This victory was largely won due to the more advanced military technology developed by the United States during the conflict, especially the deployment of Powered Infantry Armor. This period of conflict that began in 2052 and also included the Sino-American War was called the Resource Wars by historians. Many smaller nations went bankrupt in the ensuing conflict as their economies collapsed due to the increasing shortage of fossil-fuels. The Resource Wars ended with the Great War in 2077.

The Great WarIt is not known who launched the first nuclear weapon that precipitated the conflict, although it is implied by President Dick Richardson of the Enclave in his discussion with the Chosen One in 2242 that the culprit was the People's Republic of China when he says "...and then those damn Reds launched". The United States was already at war with China as part of the Sino-American War, which was just one of the group of conflicts later known as the Resource Wars, when the nuclear exchange began in 2077. According to the Sierra Depot GNN Transcripts the Power Armor-equipped forces of the US Army were nearing Beijing, the capital of China, which may be the reason the Chinese unleashed a desperate last measure in the form of a full-scale nuclear attack. The nuclear exchange that characterized the Great War lasted for only a brief two hours, but was unbelievably destructive and reshaped the climate of the world even as it caused the fall of most of human civilization everywhere across the globe. More energy was released in the first moments of the Great War than all of the previous human conflicts in the history of the world combined.

In the United States, the West Coast was hit first by Chinese strategic bombers and ballistic missiles, and as a consequence on the East Coast (which was struck at about 10:47) more people were able to get into the Vaults and personal protection shelters, leading to a higher initial survival rate.

In the two hours of nuclear fire, the geography and climate of the Earth was changed significantly. Entire mountain ranges were created as the ground buckled and moved under the strain of the cataclysmic pressure produced by numerous, concentrated atomic explosions. Rivers and oceans around the world were contaminated with the resulting radioactive fallout released by the relatively low-yield nuclear weapons used by all sides, and the climate changed horrifically. All the regions of the Earth, regardless of their location, suffered from a single, permanent season once the initial dust blasted into the atmosphere by the nuclear explosions had settled - a scorching, radioactive desert summer.

Aftermath of the Great WarDespite the global destruction caused by the war, many areas remained habitable, with low and tolerable levels of radioactive fallout. The surviving humans were in some parts of the Earth able to continue living in the ruins of the pre-war civilization, establishing new communities and even small cities. (Vault City did so with the help of a GECK.) Some major global cities were not completely destroyed by the explosions because of their relatively low explosive yields, and cities such as Washington, DC even managed to maintain intact buildings despite relatively close detonations. However, most city streets across the post-nuclear United States were and continue to be blocked with rubble from collapsing edifices. In the ruins of Washington, DC much of the city's Metro system of subways remained intact. Though many Metro tunnels were blocked by collapsed masonry caused by the shock of the atomic explosions, the Metro's tunnel network remains the easiest way to move around the D.C.ruins.

Around a week after the initial nuclear explosions, rain started to fall, however none of it was drinkable. The rain was black; tainted with soot, ash, radioactive elements produced by the nuclear explosions and various other contaminants produced by nuclear weapons. This rain marked the start of the terrible fallout that marked the true, permanent destruction caused by the Great War. The rain lasted four long days, killing thousands of species that had survived the initial destruction of the bombs, be they animal, plant or micro-organisms. Those few living things, human, animal or plant, that survived after the rain ended were left to live in the now barren Wastelands that had spread across the Earth, where nearly all pre-War plant life had died from the intense radiation produced by the fallout.

Preventable deaths during the Great WarMany American citizens did not heed the air raid sirens on October 23, 2077, believing them to be signaling just another drill. The Vaults sealed their inhabitants in (except for Vault 12, which was never intended to sealed completely) as the Earth burned in atomic fire. A few citizens that took the air raid sirens seriously but did not have access to Vaults made their way instead to various locations that they felt would be safe from the nuclear bombs' explosions: sewers and subway stations, fallout shelters (which were completely sub-standard in terms of protection when compared to the Vaults built for the American government by Vault-Tec), or in the case of the Keller Family, the National Guard Depot. However, without a very strong outer shield of dense metal or rock to defend them from both the heat and kinetic shock-wave of the nuclear blasts (such as Lamplight Caverns or Raven Rock), few civilians survived the full-out nuclear exchange. Some who were exposed to high levels of radiation became ghouls, and some of these ghouls, in turn, formed their own communities.

It would seem that some families actually survived for several years following the fall of the bombs in drainage centers, as seen after activating the radio signal Oscar Zulu, when it is revealed that Bob Anderstein needed help for his family. Those who had already earned (or purchased) places in the Vaults went into them before the nuclear attack began. Those who did not, however, were left to the mercy of the bombs and warheads and their own nearby makeshift fallout shelters. A female ghoul named Carol who lives in the ghoul community of Underworld in Fallout 3 claims, "My family did not have much money, so we could not get into a Vault." It seems only the moderately wealthy could buy their way into a Vault at the time of the Great War. However, according to letters discovered in mailboxes, many of those who could afford it were not granted space, due to the lack of time Vault-Tec had to build new Vaults, ultimately constructing only 122 of these maximum security fallout shelters before the bombs fell. The reason so many were left unprotected when the end came is because Washington D.C.'s Vaults were filled to capacity, while Vaults located in less populous states like Oklahoma were nearly unoccupied. There is a note which has a random chance to appear in any location in Fallout 3 in which a resident of the Capital Wasteland was denied access to both nearby Vaults and offered space instead in newly annexed Canada. It is not known whether any Vaults actually existed in Canada.
Click to expand... 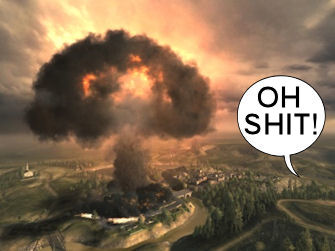 Like KHI, this FC isn't just for Fallout. You can talk about other things, like, how crap your life is. But, you will get flamed by me if you talk about that because frankly, I don't care about your problems and I don't want you to tell me about them. lol, any way. You can also ask for help. Don't go to the official Fallout 3 thread, jks. I made this FC because......well because fallout is awesome.

"2 atoms walk into a bar, the one says 'i believe i have lost an electron' the other says 'are you sure?' the first atom says 'I'm positive'" (robot butler)

"Communism is the very definition of failure!"

"Communism is the very definition of failure!"

"Did you know that irradiated cats have 18 half-lives"

A neutron walks into a bar and orders a drink. He goes to hand the bartender the money, but he says 'No charge'.

"Something about a Psychic meeting being canceled due to unforeseen events"

"Molecules have mass? I didn't even know they were catholic."