Help/Support ► tell me i'm not being unreasonable

He needs to grow some balls and get over it.

I promise I'm done with this.
Click to expand...

this is usually a lie. giiirlll, just keep ignoring him until one day when you least expect it, when you see him at school just pretend he's not there. flirt with other guys, look your best and be like boooyah.

no wonder why you broke up with him.
he can't get a grip of himself. [/childish]

tell him to go get drunk in his backyard, have a cry and then bottle himself in the face.


but that would involve having to talk to him again, i guess, and i concur with everyone else that you should just ignore this fleshy scrotum.

just fucking burn the dude. set him on fire and let him burn badly. you're not going to feel good about it but he'll be better for it.

just ignore him, he's immature, insecure, clingy, and I don't even know what he wants from you at this point.

either he'll eventually be over it or he won't, but either way you don't owe him anything. no response is the best response.

Reflection said:
woke up to this in my tumblr ask box

cant decide whether i should ignore it or tell him to go away
Click to expand...


tell him you dont care about what happens to him

thank you everyone this is a basically solid response wow but i have to say that watching that gif of yosuke rolling around in the trash can for a full minute made me feel better more effectively than your actual response, ham-chan

I didn't even read the original post passed the first few sentences because I don't need to. You aren't unreasonable. Tell the person to Fuck off. I had a problem with an ex that wouldn't leave me alone after we broke up and there really isn't any getting through to some people. Just block the fool on everything you have. Facebook, skype, texting calling, all that jazz. Excommunicate and you'll be happier i guarantee it
H

Nah you aren't being unreasonable.
The thing is, with breakups, it's hard to go on the next day and change how you've been acting towards that person. All of that time you spent together, the way you act towards each other, becomes a habit for them to act that way towards you. So it's hard to give it up on such short notice.

A lot of people don't get that. Saying "I love you", etc. after you've broken up, it's difficult to realize it's not OK to say that anymore. because you're just used to saying it and you like the response you would previously receive back.

But on the other side, those people don't get that you also want to be left alone. It takes time for both sides.
I was a COMPLETE idiot after my first breakup lol. But after a lot of time, I realize that kind of crap happens to EVERYONE. (i mean, ever damn song and movie plot have some sort of relationship shitcrap or subplots) and you move on. and so do they. Since then, I've experienced a ton of what he must have from me by other people which made me realize just how kupoing idiotic and childish I was being. I'm much better at handling those types of situations with other people now. I try not to hurt their feelings. Hopefully your ex will realize the same!

Everything will eventually be awesome for both sides. You will be happy, and they will come to realize why you are happier without them!
Last edited: Jul 4, 2012 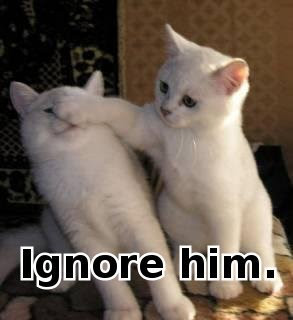 
His mom? You kupoing kidding me? xD

Dear God, this guy. It seems to me this dude is trying everything he can to get your attention and is thinking of lousy excuses to do so. Ignore this dramaqueen.

IS IT NOT ENOUGH THAT HE HAS ZOE'S ATTENTION??? IS SHE NOT GOOD ENOUGH?? SHES PROBABLY HOTTER THAN ME AKSDFL;

why don't you just tell him to fuck off?