So, now that we understand that the realm of fiction/unreality is going to be the new frontier of the series, I feel the need to point out that, contrary to what the game would lead us to believe, this realm is a place we've already visited before on more than one occasion.
Of course, we all know about Union X and the Wreck-It Ralph storyline, but besides that, Sora himself has already had at least two journeys into the fictional realm already. And the way he's gotten there raised significant questions about what to expect going forward.
First of all, and this is a pretty big deal, but Young Xehanort managed to just poof Sora into Quadratum in the Toy Box world, even though everybody is now acting like the fictional realm is supposed to be incredibly tough to get to. This raises the question: How does YX have the ability to just casually access the fictional realm? YX is an incarnation prior to that of Apprentice Xehanort, so that means Xehanort's experiences with the fictional realm must precede his work with Subject X. Could Xehanort have had run-ins with this realm during the events of Dark Road? And if he has, could that mean he remembered that place and returned there as Xemnas in order to recruit Luxord's Somebody into the original Organization XIII?
Second, and this is even more intriguing: The Hundred-Acre Wood is actually technically a fictional world, I think. Of course, it's never explicitly mentioned in the series, but we can surmise that it's neither a real world, nor one made of memories, nor one made of data, nor one made of dreams, so ergo it must be fictional. The fact that it's also a literal storybook kind of makes this a no-brainer. But the implications of this are pretty important. Does that mean 100 Acre Wood could return yet again as a more important world in the future of this new storyline? And even more interesting, what is it that's so special about that one world that it's the only fictional world that's easily accessible from reality? Maybe there's more to the history of that book then we've been led to believe. I wouldn't put it past Nomura to pull something wild out of his hat.

I think I would simultaneously be like "ugghhh" and "oooooh~" if these story aspects tie to Dark Road. On the one hand, it would give much needed clarity on how Xehanort even knows about it in the first place. On the other hand, there's the whole needing to play the mobile games to get the complete story argument. 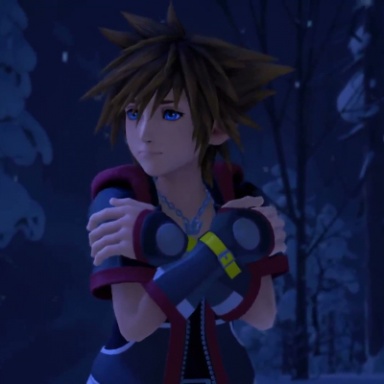 Its not like Dark Road was only Xehanort's story, for me it was always obvious they would at least makw something happen in the story that'd be important in the overall Kh story.

Spoiler Show
masters who disappeared will lead us and Xehanort into an Unreality world, probablt he will even meet and know Luxord there in some shape or form.

I don’t think the Beat of Lead area is actually Quadratum, but is rather a partial data version of it. It’s still on the main KH universe side of things just the Datascape. I think Wreck It Ralph in UX is a similar situation of being a data world rather than a fictional one.

As for Winnie the Pooh, it’s also still on the KH-reality side. I think it is considered a real world rather than a fictional one because of the nature of the book. It and the people inside can be physically and mentally impacted by anything going on outside it. I think that is enough to consider it a real world.

Sadly, due to China’s banning of the character, I doubt Pooh will ever have a more prominent role if he shows up again at all. I have a feeling that may be why there was no inclusion of the world in MoM.
You must log in or register to reply here.
Share:
Facebook Twitter Reddit Pinterest Tumblr WhatsApp Email Link
Top