Possibilities if KH3 has a VR experience?

So after watching the Sony E3 press conference for the third or fourth time, it dawned on me now that FF15 has bonus PSVR content it can't be ruled out that VR may sneak it's way into other S-E titles, including KHIII. If there's one thing I've learned over the years it's that Nomura will always do something absolutely bonkers when it comes to new game mechanics so we may well see him try something related to VR. While Promto's mission is just a fairly simple mini-game, it is something releasing right around when PSVR launches & thus is kinda expecting to be a tech demo more than anything else. By the time KH3 comes out, VR game development would be a lot further along & KHVR could be a much more substantial mode in comparison.

So after brainstorming for a bit a few possible ideas came to mind, ranked in order of plausibility: This one is the most obvious because it basically substitutes Prompto's FPS gameplay wholesale. Plus Sora even puts on some sort of holo-visor in this mode that would allude to a VR headset: Come to think of it, the actual Astro Blasters ride doesn't have any such eyewear so it's presence in the AF is odd.

If only the PSVR had built-in slobber functionality then it'd be perfect. Tried to come up with a substitute for the Cidney car ride scene & this was the only logical option.

4. Full-blown first person view in the main game.
It's crazy, but it was possible to move & fight in 1st person in KH2, to the point one could theoretically play most of the game in 1st person.
[video=youtube;DhkVn8ldlLY]https://www.youtube.com/watch?v=DhkVn8ldlLY[/video]
[video=youtube;s_yisyaApUg]https://www.youtube.com/watch?v=s_yisyaApUg[/video]
It stands out to me that 2 main things disrupted the view in KH2, transitions to different zones & reaction commands, & KH 3 has neither of those in the game. Thus 1st person could be kinda more functional provided the player avoids the use of flowmotion.

Anyone else have any ideas of how VR could be implemented into KH?

It's definitely a possibility, but I don't see it myself because there is no apparent "need" for it. And I don't think many people wanted it either. 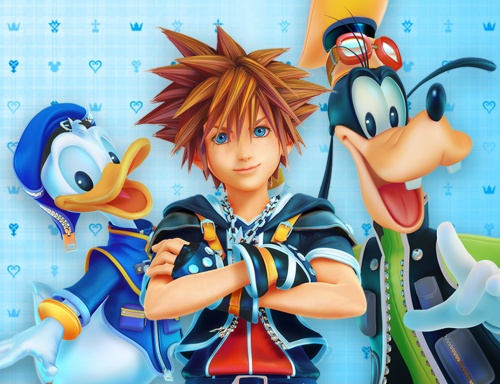 Location
The Springs of Powder

It's an interesting notion, but I just don't see how it is practical from a gameplay standpoint. Maybe you could make that a thing for some type of challenge run, throughout the KH community.

3rd person action is ill-suited for VR. Maybe watching the action from afar like it is now, only you get the benefit of your whole screen covering your FOV.

I feel as though attraction flow is the most likely possibility for a VR experience. They could really take advantage of sounds and vibrations to give the immersion that you're really riding on a Disney ride.

I don't think that would be a good idea.

This is mainly due to extreme motion sickenss and the high speed movements performed by Sora during flow-motion that would cause you to feel extremely ill. I mean some people do get sick after just sitting on a rocking train or car for a little while for example, imagine that on steroids.

On a side note though, maybe do the Prompto thing, but with Donald Duck. Make a Donald Duck FPS lol

I think the mini games are ripe for VR gameplay, especially that first one you mentioned. Most everything else though, unlikely. (And to be honest, that gameplay with VR on FF15 looked bad unless the person demonstrating it just sucked)

A few mini games compatible with VR would be fun and a small experience that wouldn't take away from the game. Completely optional. As for a relaxing ride type of scenario, it could also be the train ride to Yen Sid's tower if they still have to take that route. Or, just a relaxing ride on the gummi ship.

I'm inclined to think that Sony probably sort of pushed/asked SE to create VR support since the PSVR is launching this October, and since FFXV is a popular title coming out around that time maybe Sony is hoping that it'll help to sell PSVR units upon launch. SE probably also developed the VR experience to test the VR technology and what it's like to develop for it, to get ideas, etc.
That being said I could I see KH3 getting some sort of support for VR, but I wouldn't have thought so at all before the announcement of FFXV's VR experience. It definitely wouldn't be anything more than an "experience", but I think that VR support for gummi missions or attraction flow pretty much writes itself (think the star wars battlefront x-wing VR mission HOW COOL WOULD THAT BE????)

I'd prefer bonus content like how they're doing FF15. I can see some mini-game type things with it, perhaps flying around in the gummi ship with missions would be a fun VR experience. I am curious to see that form of gameplay with RPG-type games.
S

Not EVERY game needs VR. I really hope this game doesn't jump that bandwagon. Although...I do happen to own a keyblade so it could be fun.