Translations are below the scans, thanks to Saken!

-In KH3D, there were AR cards that allowed you to obtain certain spirits to fight by your side. How is this handled in KHDDD?

Nomura: Those spirits will be obtainable through regular play of the game.

-In March 2017, KH HD 1.5+2.5 is set to release. Will there be any changes this time?
Nomura: There are no changes. The contents are exactly as they appeared in KH1.5 and KH2.5. However, they are all compiled onto one disc, so they've become even easier to play.

-Will you be creating any cover art for KH HD 1.5+2.5 this time?
Nomura: I don't think I will. If you look at the 3 cover arts for KH1.5, KH2.5 and KH2.8, you will notice that they're all connected. So, a new cover art would unfortunately remove any meaning from that. To those that don't understand what I'm talking about, if you line up the 3 titles, please pay particular attention to Sora's poses and the background scenery.

-After KH2.8 releases, then that leaves only KH3...
Nomura: As discussed before, we are remodelling all models from scratch, which requires quite a tremendous amount of effort, however we are tackling this to the best of our ability and can safely say to rest assured, it is all going along smoothly.
I would really like to release new information, however at this present time I am unable to. I can say that we are currently working out the timing for future announcements. 2017 is the Kingdom Hearts Series 15 year anniversary and to represent this there will be plenty of commerative events at the concerts, so if possible I would also like to take those oppprtunities to release new information, however it's yet to be decided. I'm terribly sorry to keep you all waiting for so long, but please wait just a little longer.

-Do you have a message for fans awaiting the release of KH2.8?
Nomura:As for KHDDD, I recommend to those that have already played through KH3D to freshen up your memory of the story, and of course to those yet to experience KH3D to please enjoy it by all means.
If possible, I recommend to play right through and watch the secret ending, and only then proceed to KH0.2.
As for those eagerly awaiting KH3, KH0.2 is a small taste that we have created especially for you to try and enjoy.
KHBC is a story that is very slightly disconnected from the main story, so you may enjoy that whenever you wish, whether that be to appreciate the visuals, or whenever you find a moment. Just as the title states, KH2.8 is most definitely the last chapter's "prologue", and as such it is safe to say that KH3's story has already begun.

I want that art of the BBS trio as a avatar now. Can't wait for the translations.

The continuous lack of Skuld makes me a sad fudge.

Pretty funny how the Foretellers are almost lined up like organ pipes, lol.

They also placed the mysterious guys (MoM and Luxu) and the cutie-cinnamon rolls (Chirithy and Ephemer) more or less together *ggg*.

I also still can't get over NGE-PenPen the bathing penguin as a Dream Eater.

I'm really interested about the Chirithy. With all the scenes and shots we see, I hope it'll explain more about them and their origin.

Adorable art up top with those three sketches. And another shot of Ephemer! Still lacking Skuld, but maybe it'll just be a surprise for the movie, I suppose.

I replaced all the scans in the OP with ones from my iPad. They're larger and should provide better resources if you wanted to cut out an image such as the art on the first page of Dengeki.

Thanks.
By the way: Hello drop-gauge my gorgeous friend. <3 I haven't noticed you in a while but now I did. 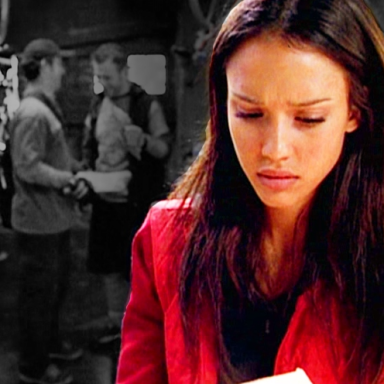 FudgemintGuardian said:
The continuous lack of Skuld makes me a sad fudge.
Click to expand...

Exactly how I feel. Her being left out of Back Cover, if that is what's happening, makes absolutely no sense to me. Shouldn't one of the Foretellers see her with Ephemer? Even if it's just a passing glance? And then there's the scene between her and Ava and Player, her being a part of Ava's speech to the crowd, the scenes between her and Gula, the fact that she was the leaders of the Dandelions in the real Daybreak Town (while Ephemer was the leader of them in the Unchained realm) after Ava left, etc.

I swear, why is it always the girls in this series who get the short end of the stick?:/

If she's not in Back Cover, I'm really praying she's at least in KHIII.

But seriously, Square. What are you doing? Why would you cut Skuld out (unless there's some weird plot twist reason as to why). Don't you know how well-received she was, and that we want to see our brown-eyed, long-haired, non-Kairi clone girl in beautiful HD graphics? Gah!

Maybe they're trying to spoil her yet, we only seen Ephemera in one trailer and we haven't gotten another scene of him since the E3 trailer, months ago. Nothing about the short end of the stick, maybe she doesn't play a role in the movie?
U

Rendering her long hair was too much,explains why she's been missing.

I still think we will see her in kh3

I also think if she's gonna make it in they'll try not to spoil her too early, maybe?

VoidGear. said:
I also think if she's gonna make it in they'll try not to spoil her too early, maybe?
Click to expand...

All i wanted was a render of her..is that to much too ask.

it is pretty suspicious that the game is coming put on under a month and we still haven't seen even a render of Skuld. Don't know if they don't to spoil her, but she's been in jpux for around 6 months so I don't think she would really count as a spoiler, unless she's involved in some heavy endgame stuff in BC or whatever.

Still holding on hope that she pops up, but I'm def suspicious of what's going on until release day.
D

stareyedprince said:
it is pretty suspicious that the game is coming put on under a month and we still haven't seen even a render of Skuld. Don't know if they don't to spoil her, but she's been in jpux for around 6 months so I don't think she would really count as a spoiler, unless she's involved in some heavy endgame stuff in BC or whatever.
Click to expand...

6 months in jpUx is like, completely unknown for the main fandom, tbh. Considering just the other day a "fan" asked me how I knew what the Foretellers are if Back Cover isn't out yet...

I'm starting to adjust to the thought that maybe she won't even be around at all.

I spy with my little eye, a smol KH3 screenshot. Neat.

Don't think I've ever been so happy to see Mickey and Aqua fighting together on the Destiny Islands. That said, I'm going to take a gander and guess that Destiny Islands is probably the final world in the RoD that Aqua goes to.