Nah, I don't think it's Mickey, i'm thinking now that its gonna be the DS. Or Aqua. But with Aqua, doncha think in that one interview, Nomura would've just said, Terra, Ven, And Aqua were playable? I mean, what need would there be to hide the fact that she's playable.

He maybe a great video game producer, but he's not too great at hiding things huh? XP Not saying it IS DS, but it is somebody we wouldn't expect i'm thinking, otherwise he wouldn't have left the third playable character's name out right? 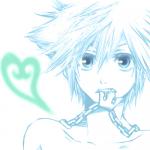 I think i had seen before a magazine scans which didnt mention Aqua name but named her as "mysterious gal" right ? and yet Nomura stated in interview that we are able to play as Terra , Ven and one of the main character in secret ending . So , i do hope is Aqua not Mickey XDD
V

nice find! the DS wou;ld be sweet to play as!!!