First Game You Ever Played

The first game I became interested in was minecraft. I don't just play from time to time, but spend a lot of time in the game. I am on the leaderboards of several servers and participate in various competitions. Tried a lot of different servers already. Maybe someone knows some cool servers? I have played on these servers https://best-minecraft-servers.co/ , but I got tired of them, I want to try out better servers.
I also shoot youtube walkthroughs of minecraft and other games. 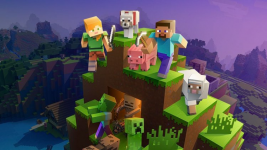 The first game I ever remember playing was Kingdom Hearts when I was 5. My brother had an N64 so I probably played other games but that's really the first one I can remember.

I have a few early memories of playing certain games, but I can’t really pin down what the first would have been.

It was either the original Crash Bandicoot or one of the early Sonics.

It was probably Kirby on Nintendo. My family had a Nintendo at one point, but it was dead before I was old enough to remember. After that, we had SEGA--which we had mostly Disney games, Ms. Pac Man, Tetris, etc.

I had some Pokemon and Disney stuff for GameBoy. When I was older, I got a PS2 that was mine alone rather being shared with everyone else. I suppose the first games I played on that must've been Crash Bandicoot, particularly CTR. Probably the first serious game with an actual story and not a film re-creation I ever attempted to play was Final Fantasy X. I quit it before you even get to Besaid, lol. A couple of years after that, KH1 came out and I had to have it. After playing that game and reading that the same company had another series called Final Fantasy, I realized I had one of those games already that I'd never played entirely. That's when I went back to FFX and that's how I became a fan of both Disney and FF.

I dunno if I can quite remember particularly which game I played first for every console but I will try my best:

PS1: Rival Schools
PS2: I think it was probably Naruto Uzumaki Chronicles but I'm not certain, irregardless, the 2nd game I got was KH2, and that's what I played on it the most
PS3: Again it's a little hard to remember, but I think it was Virtua Fighter 5
PS4: F1 2015 lol

My dad also owned a Sega Mega Drive I sporadically used, I think the first thing I played on it was Road Rash, which is bonkers, and the original FIFA which is GREAT
T

Probably a Sonic game on Sega Saturn or Sega Genesis. It gets fuzzy thinking back that far. I mainly played with my cousins who were a bit older than me. The first actual game that belonged to me was Kirby Super Star on the Super NES. I grew up on Mario, arcade, handheld and fighting games, but eventually transitioned to playing more games on the PlayStation, but my sister and I owned most consoles from all the major companies through the 6th generation of gaming. I stayed mostly Sony 7th gen and on.

Spem said:
I can't say for sure, but I think it was either Pokemon FireRed (GBA), or Crash Tag Team Racing with my brother on PS2.
Click to expand...

Bufferino said:
First ever? Spider-Man 2 for PS2. I do not have a PS2 and never did, but one of my relatives let me play with it.

GBA: Some kind of Shrek game (no meme intended)
DS: Some snowboarding video game (eh)
PS3: Madagascar Racing game (complete trash)
Wii: Wii Sports (meh)
3DS: Kingdom Hearts: Dream Drop Distance (good game, used to hate it, but now I really like it)
PS4: Star Wars: Battlefront (lost interest quickly)
Vita: Persona 4: Golden (dunno why I even added this, I don't even own the console, but I do own the game)
Click to expand...

another jojo fan? i saw your signature

Is that Orphen? Scion of something???