Didn't know whether to put it here or kh shower thoughts, but I ended up putting it here.
I'm 7 minutes into Raya and the Last Dragon, and Raya's father called her a princess of heart. 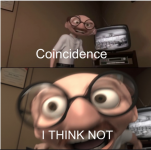 Willow A113 said:
Didn't know whether to put it here or kh shower thoughts, but I ended up putting it here.
I'm 7 minutes into Raya and the Last Dragon, and Raya's father called her a princess of heart. View attachment 14011
Click to expand...

Princess & the Frog also felt like blatant KH bait with the villain who comes forth powers of shadow from his "friends on the other side".

Disney & Pixar often tend to have a certain level of hyperbole to them ("Lightning is the greatest racecar in the world!" "Ernesto de la Cruz is the greatest musician in the world!") that you sorta just roll with because they're set in their own worlds & aren't meant to be comparable to real life accolades. It's a harder sell however when actual real world comparisons are in the film itself however.

Case in point, WiR claims that Sgt. Calhoun has "the most tragic backstory of any video game game character ever!" Because her fiancee died on their wedding. Ignoring that I could probably spend the next hour listing characters that had it as bad or worse than her, it's a bullshit claim even in-universe thanks to this Easter egg:

Characters in GCS are aware of FF7 (which raises questions of its own how that's possible) but still think Calhoun had it worse than Aerith or anyone else in that game.

How are the toys in Toy Story able to move about in places like Al’s Toy Barn or Sunnyside without being noticed on security cameras?

Ernest-Panda said:
How are the toys in Toy Story able to move about in places like Al’s Toy Barn or Sunnyside without being noticed on security cameras?
Click to expand...

I can’t find an answer for this, and now my childhood is ruined, thanks.

TLM: Where are the mermaids’ gills located?

I have, like, a million questions about the doors in Monster’s Inc.

What happens if the power goes off when a door is still open? Does the portal just fade away?

What does the other side of the door look like when that happens? When you open a door without the power on, the door just swings out from the frame onto the other side, but when the power’s on, one side of the door opens into the kid’s room or wherever, while the back of it looks like it’s still closed. When the power goes off while open, does the back just materialise into the “open” position? What if somebody is behind the door when that happens??

What if the power goes off when somebody is halfway through it?

What if the door is open when it’s put through a shredder?

What if somebody from the other side tries to go through the door while it’s in mid-shred?

When are Dash & Violet ever getting proper hero names? They're not seriously going by their real names, are they?

Pretty much everyone grew up watching Disney films, whether it was Snow White,...

I’d genuinely like to know where the hell the majority of these character ages are even coming from?

Among the characters listed there, I can count the number who have actually had their ages stated on screen on one hand (about three, off the top of my head)

And it’s not just this article. It seems to be “common knowledge” across the internet that Snow White is a mere 14 years old, while her prince is a literal 30-year-old sex offender.

What the actual hell?
Last edited: Thursday at 11:51 PM

Willow A113 said:
How do mermaids reproduce?
Click to expand...

Spores from the armpit.

Willow A113 said:
I can’t find an answer for this, and now my childhood is ruined, thanks.
Click to expand...

I can answer this!

Alright, for Al's Toy Barn the answer is very simple: the store is on its way to financial ruin, and as such has no cameras to speak of. It's made very clear throughout the movie that the store is losing money, and fast which is evident through Al's desperation. Look at all of the Buzz Lightyear figures they have, way more than the entire TOWN would ever need. All of them were purchased for sale following a craze for them back in the day, and as such they won't move. So if the store's trying to salvage itself, then they won't have the money for cameras to watch over it will they?

As for Sunnyside, we already know that the monkey is in charge of surveillance. And it's likely that they (the toys) erase the footage every day before employees come in during the early hours of the morning. Otherwise it would be shut down due to haunted trucks moving around and possessed dolls making the rounds. Besides, it's a daycare, what's there to steal except sand and a couple of Lincoln Logs?

Willow A113 said:
TLM: Where are the mermaids’ gills located?
Click to expand...

Well, most Osteichthyians (that's the group that bony fish belong to by the way) have gill slits behind their mouths in order to breathe by having water go over their rakes located inside them, allowing respiration. However TLM doesn't depict merfolk with these, leading to me to speculate that they're amphibious like mudskippers to a degree. Ariel can be out of the water and not suffocate, which suggests that merfolk are capable of breathing air like us with specialized lungs and only live in water because their bodies are better suited for it.
My B.S in science is clearly getting some use on this forum.
Last edited: Saturday at 1:44 AM
You must log in or register to reply here.
Share:
Facebook Twitter Reddit Pinterest Tumblr WhatsApp Email Share Link