Fanfiction ► An Argument For Darkness

A Riku introspective, inspired by Keyblade Shards' excellent fanfic starring Roxas (and I can't remember the name right now for the life of me).

--An Argument for Darkness--

Disclaimer: Kingdom Hearts and all related characters are copyright to Square Enix, Disney, and all other affiliated parties. Parts of the storyline are my original creation, and therefore, they belong to me.

People tell me that my strength is the kind born of suffering. I guess they're right. Having Ansem's brand of darkness inside my heart hasn't been a party.

Sometimes, I wonder what would have happened if I hadn't been so desperate to leave Destiny Islands. But there's no point in worrying about what could have been - destiny wouldn't have let me change it anyway.

Sora once asked me why I tried to do everything myself. I answered that it was because I wasn't a total sap like him, but I was just trying to cover up my shame. My guilt.

Maybe. . .I should start at the beginning. Sora got to tell you HIS story; now it's time you heard mine.

It had been weeks, but I was finally carrying the last log for our raft along the beach. Of course, I held it solidly against my side. Sora could hardly carry the same kind of log, but the kid tried. I bet he could probably lift one easily now; that Keyblade isn't exactly light.

Heh. Anyway, I was almost to the raft when I saw Sora and Kairi just talking on the beach.

"Hey!" I called, catching their attention. "Aren't you guys forgetting about me?"

After a pause, I added, "So, I guess I'm the only one working on the raft."

I tossed the log to Sora, who fell on his back in an attempt to catch it. I walked up to Kairi and gave her a disapproving look.

"And you're just as lazy as he is." I couldn't stop a smirk from making its way onto my face.

Kairi just giggled and responded with an uncaring "So you noticed."

If I had to pick the one thing that set all of this in motion, it would be Kairi. She came to islands when Sora and I were still just kids, and she lived in the Mayor's house. Sora was fascinated by her, but I would've rather built my sandcastle. I swore back then that it would last forever, and that everyone would speak of me as 'Riku, the one who built the greatest sandcastle ever.'

I had completely forgotten about rain. I managed to cover it up by saying that I was bored with making it, but I was, in fact, disappointed and upset.

Anyway, Sora and I met outside his house one morning, since I always woke up earlier than he did, and we went to the mayor's house together.

It was a big house, bigger than mine or Sora's. Maybe the size of it intimidated Sora, or maybe it was just childish shyness. Either way, when we got there, Sora stepped back.

"What's wrong?" I asked, turning to face him. I started laughing when I saw his face. IT was beat red, even though he tried to hide it by looking at his feet.

"Hey, stop that!" Sora said, now meeting my eyes and trying his best to look intimidating despite the redness of his face. I managed to stop laughing but I couldn't help the right side of my mouth, which decided to remain in a smirk-like state.

"What, are you scared?" I asked, even though I knew the answer. This was the same stunt he'd pulled when we'd explored the Secret Place. He'd dragged me along to find the monster that lurked inside just a few weeks before.

Now that I think of it, maybe. . .No, that's not it. I didn't know what that door and that jeyhole were for back then, and I didn't care, either. I thought it was weird that there was a door and keyhole in the middle of a room of rocks, but I was much more concerned about 'told-you-sos'.

Sora didn't answer me. He didn't need to. I knew he was scared, and even though I was annoyed that he'd just dragged me along for his dirty work, I was also gratified.

"Alright, I'll get it." I said, my smirk turning into a smile (even though it was a still a mocking one), and I stepped up to the door and knocked three times.

Location
In the islands...

Location
Sitting inside the viewfinder of a camera, watchin

DH, I LOVE it! This is great ... you always get Riku so IC. I'm so excited that you're telling the story from Riku's side, aka, best character EVER. <.<; *pushes aside Sora fangirls*

Update! ^-^ While I go work out my own fics to distract myself.
D

I keep seeing the KH2 commercial on Teletoon. . .*spazzes*

--An Argument for Darkness--

Disclaimer: Kingdom Hearts and all related characters are copyright to Square Enix, Disney, and all other affiliated parties. Parts of the storyline are my original creation, and therefore, they belong to me.

I had to admit, as Sora and I waited for the Mayor to return with 'the new girl', I was becoming just as nervous as he was. I fiddled with my blue and yellow wristbands while Sora looked at his feet. Thoughts ran through my head, chasing eachother in circles; what was she like? Did she think boys were 'gross' or 'icky'?

I thought that that was really immature; Selphie had played with four boys (including Sora and I) ever since she was a toddler, and even though she was still really young, she'd never thought that boys were something to avoid.

Maybe it was because we were eachother's only entertainment. Selphie would've been bored to death if she hadn't joined in.

The Mayor finally came, with Kairi trying to use him as a human shield against the gaze of the 'two very nice boys who want to meet you'.

"Go on, Kairi." a gentle hand pushed her forward and out the door, and the Mayor retreated, clsing the door. Kairi turned around in surprise when she heard the door close, but quickly turned back around, her face growing red.

As I opened my mouth to speak, Sora dashed forward, nearly tripping over himself, and said, with his eyes closed and his face the reddest it had ever been;

Kairi giggled at his preformance, and I outright laughed. Although Sora seemed pleased that he'd gotten the new girl to laugh, he looked embarassed that his introduction made ME laugh.

Sora took her hand and shook it cautiously, causing her to giggle again.

"I'm Riku." I said, pointing at myself with my thumb, a small smile still remaining.

"It's nice to meet you, too." Kairi said, and shook my hand.

She was immediately accepted into our group. Once he'd gotten over his bout of shyness, Sora started talking to her a lot. That was how we found out that she was from another world, one that she couldn't remember.

But. . .'Another world' isn't really the right way to say it. Even though we called it 'another world', we actually thought of it as a city or a town or something that was on a distant mainland.

That's why we decided to build the raft. We'd sail away to Kairi's hometown, and she'd be greeted by family that she'd long left behind.

That was Sora's thinking, anyway. Gradually, it became less and less about Kairi's family and more and more about 'what's out there, beyond those waves'?

I think that I was the one that started that thinking. The idea of something else out there - something much, much bigger than the closed-off world we knew - had me hypnotized. As I grew older, it was all I could think about. I'd be the first person to our little island in the morning, and the last one to leave at night. Even though Kairi and Sora wanted to see other worlds, too, they didn't care whether or not the raft would actually float. It was the adventure that they were looking forward to, not the outcome.

I think I wanted so badly to find out because I was scared. Very scared. Scared that there were walls to our world that we would run in to, where we couldn't go any farther even though the land - or sea - stretched out far away from us.

Even though some of these thoughts disturbed me, it was a break from the usual worries about someone getting so strong that they beat me in a match, or the worries about being remembered as the best sandcastle builder ever.

The night that we finished the raft, I thanked Kairi. Without her, I never would have thought about any of this. I would have been trapped on these islands forever, never knowing what lay beyond!

And now I was driven to know. I HAD to know.

What I didn't know. . .What I didn't see coming. . .Was that my desperation would lead to the destruction of my home.
A

Me likies very much so. You connect everything in Riku's past to his present demeanor so very well.

I will be checking for updates, missy
E

Ooh very nice! It's cool to see Riku's perspective of things, and he's perfectly in character ^^ Keep it up!
D

KS - I pulled the fear of running into a wall from a fear that I myself had not too long ago, the first time I played through Wonderland on KH1. It was such a box, including the sky, and being able to touch the cieling made me get really, really scared that if I went far enough, there would be a wall that would stop me.

Managed to shake that one, though.

Location
The other end of the leash.

Whoa. This is the pwnage. =O Update soon, dude. There were a few spelling errors, but this is really kool lookin'. Post more, soon.
D

Sterling - And those spelling errors eat me up inside. Too bad I'm too lazy to go back and fix 'em.
S

Location
The other end of the leash.

And bein' called Sterling eats me up inside, so I guess we're even. I'm just too lazy to tell people to call me Silver. =D 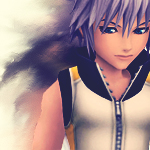