Speaking of Aqua 'saving the villain' [in which point, use Antagonist, not Villain], if Aqua see something human in Dark Soldier, then it isn't totally out of the possibility for Aqua to save DS or even defend him from Terra. After all, as we see Terra, he's becoming a person who will do anything to accomplish his goal, to destroy MX. 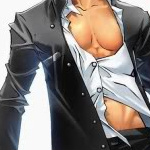 She's kind hearted, that doesn't mean she will protect someone who just tried to kill her.

Zeagal said:
She's kind hearted, that doesn't mean she will protect someone who just tried to kill her.
Click to expand...

As I've mentioned in the first paragraph, I believe Aqua may defend DS if he's considered human and have a mere possibility of being saved or something. But then again, it depend on the character of DS. Was DS created? Was DS forced experiments on him? Or DS willingly allowed experiments on himself? If he has no will or behind that mask, he's a person who's under pain, then maybe Aqua would feel pity for him.
A

Here's a better question. Where did xemnas found aqua's armor? No mention of her armor in ansem reports so it must be after xehanort turned into a heartless and nobody that aqua's armor appeared. Xemnas 'created' the chamber of repose, but what is the chamber made out of?

im starting to think aqua is going to be a being with pure light.
it seems very possible. she is kind and cares for her friends

also, in the trailer when Terra tells aqua about MX chasing those beings, aqua touches her chest, and then the scene changes

I highly doubt aqua would protect a sworn enemy.

but hey, its just a theory.
C

Your all wrong apparent Aqua is sleeping with MX and DS.
I mean isnt it obvious?

There is three case here. If the DS, to her, is nobody, then no. She won't protect him from an enraged Terra, I don't see why in this case. She wants DS to go down along with MX.

Second, if she grow sad for DS during the game, or worst if the DS is a long lost friend or something like that, then maybe. But this is under the assumption Terra would focus on attacking the DS and not MX, what I think is impossible so immediately rules out this possibility. If Terra attacks DS & MX, then Aqua wouldn't protect the DS. She tries to defeat him and then she saves him when her friend succeeds to take him down, it would be ridiculous.

Third, on the other hand if Terra succeeds to take them down and just go on a sadistic stance keeping to make suffer the DS, then she may defend him, even if he is nobody to her, because leaving Terra doing this would be going down to a cruelty level I cannot see her kind of character accepting.
E

Location
Twilight town with my friends noming on some ice c

well your theroy kinda works out everything

Location
At the bottom of your sock drawer

Or maybe she just ends up fighting Terra for whatever reason (He does appear to change at the end of the movie- it would make a great twist), and what little memory DS had as Xeahnort, he only thought she was protecting him
C

where do you guys find out about BBS stuff?

where do you guys find out about BBS stuff?
Click to expand...

well go to KHinsider.com
.
I

..Uh why would Aqua be helping the villain ? Just does'nt make sence