The first non-numbered title in the franchise, Kingdom Hearts Chain of Memories, was released in 2004 on the Gameboy Advance. Developed by Jupiter, the game featured a unique card-based battle system and sprite-based graphics, perfect for an on-the-go adventure.

In this interview, the leaders of the System and Graphics Team discuss their experiences in trying to meet the expectations of a Kingdom Hearts title while dealing with the technical limitations of the GBA.

As always, many thanks to goldpanner for her hard work in translating! If you'd like to say thanks, please consider buying her a coffee! 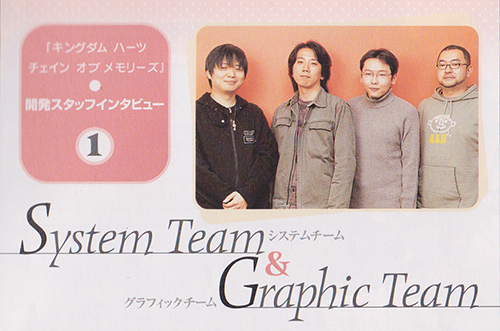 —How was it decided that the next game to follow the smash hit Kingdom Hearts would be a card action game?

Kanemori: A lot happened before we settled on its current form. We actually started development form Chain of Memories at the same time as KH2. Compared to KH2, an orthodox sequel, this was to be an 'inbetween' story. Plus, it was going to be on a different console, so there was a lot of trial and error involved in figuring out what exactly was "KH-esque"...

Arakawa: At first it was more of a pure card game, wasn't it.

Kando: When we all got together to discuss ideas, director (Tetsuya) Nomura said he wanted to do a KH series card game. And then right after that, he also said, "But since it's KH, it has to be a KH-esque one." A vague instruction indeed (laughs).

Kanemori: When he said that, I said, "Understood. KH-esque, got it" (laughs). So that's how development began, but in the end we relaxed as we realised that even while making a card game, it wouldn't work if the controls felt too removed from the previous game, and things drifted closer to its current form.

Hasegawa: To put it simply, the action components gradually increased. In the beginning you couldn't even jump.

Kanemori: When we started development, it was just a card game that had taken on the series aesthetic and story. Maybe that would have worked anyway, but we didn't want fans who played the previous game to be like, this is a completely different game. That brought on a change of direction - we worked to make something that people who played the previous game could get into easily, and that would make them think "oh yes, this is KH."

Kando: When I played what the development company Jupiter had made using Kanemori's specification documents, I accidentally said, "oh, it IS KH!" out loud.

Kanemori: It was difficult to adjust the balance between the card ls and the action. Put too much emphasis on handling the cards, and Sora's just standing there saying lines. But then put too much emphasis on moving Sora, and you start wondering why you even need the cards. We basically covered the borderline parts by making sure there were a wide range of card effects.

—After Side Sora, you can play Side Riku. Was this planned from the start?

Kanemori: We didn't start working on it til the latter half of development, but we had been saying we wanted to do it from the start. We decided it would involve different rules than Side Sora, which meant even fighting the same boss would feel like a different kind of game, and bring out a different kind of fun. That was our goal. Side Riku is sort of like a kind of puzzle game - it's fun to figure out how to work with a fixed deck.

Arakawa: When we started on Side Riku, I realized we needed to make a different title screen from Side Sora's. It would be boring if there was just some text there to select, right? I listened to Kanemori's concept for Side Riku and made a placeholder picture to show Nomura at the next meeting. I told him to draw something to put there, I pretty much sprang it on him (laughs).

Trial and error developing for the GBA

—Although the previous title was on the PS2, this title was for the Game Boy Advance. Was there anything in particular you paid mind to?

Hasegawa: When creating 2D pixel sprites for 3D characters, they end up with a chibi feel no matter what you do. I paid a lot of attention to the art, trying to make sure there was a balance. Sora worked out rather chibi, but we did a lot of versions of the taller characters like Cloud and Leon, testing what level of chibi would work for them.

Kando: My main task was creating materials to give Jupiter, so they could make the pixel art. I re-rendered the 3D CG from the previous game to find the angles that would look the best in 2D. I prepared materials for everything: Sora's battle motions, the Heartless, and more. I paid a lot of attention to adjusting to find the very best angles.

Hasegawa: Also, we all went back and forth over how to do cutscenes at that level of resolution. Should we use talk sprites that show the characters' expressions? Or should we have the little sprites act everything out?

Arakawa: In the end we did both (laughs). But I think the way we were able to express everything through the facial expressions and gestures was perfect for the GBA console.

—The map involves unique gameplay too, doesn't it.

Arakawa: Making rooms using cards was something Nomura was saying right from the start.

Kando: At the very start of development, Nomura drew out on a whiteboard his idea of what kind of game he wanted to make. Things were fleshed out from there, but those bones stayed the same right from the beginning. Thinking about that now, it's pretty amazing.

Hasegawa: If I remember correctly, at the beginning the maps were simpler - the rooms were going to fit on one screen. They gradually got bigger, until they finally became the auto-generated rooms.

Kanemori: The screen where you switch rooms also started out as a tasteless menu where you just selected a card. I think the expressive way it is now, where a spotlight lights up a door in the dark, does a good job of making the rooms actually feel connected.

Arakawa: I designed it based on that symbolic scene from the previous game, where the door opens in the dream.

Kando: Also, at first battles didn't happen on the field.

Hasegawa: Yeah, that's right. You used to have to put a cursor over a stationary Heartless on the field to start the battle.

Kanemori: Changing it to an enemy encounter system was a big decison. We made the battles happen on a dedicated field fixed to side view.

Arakawa: Refining battles to side view made the action much easier to do.

The day we finished the ending…

—The cutscenes that play during the opening and at key points make a huge impact for a GBA game.

Hasegawa: Right from the beginning of development, we said that in the name of being "Kh-esque" we wanted to put in movies. But, when we actually tried some test displays on the GBA, the video just wouldn't turn out how we wanted…

Kando: We couldn't reproduce the cutscenes from Kingdom Hearts.

Hasegawa: Yeah. You can make cartoon styles with block colors and minimum shading come out looking good, and you can make photo-realistic footage look good since the high amount of information means a little roughness doesn’t stand out. But the 3D CG cartoon look of KH involves designs built on subtle gradations - the image data doesn’t compress well. So, we tried all sorts of tests - changing the screen brightness, adding shading to the finished cutscenes, etc - until we reached a level of quality we could accept.

Arakawa: Yeah, we did fiddle around with screen brightness a lot, didn’t we.

Arakawa: In the end, we even checked it on the Nintendo DS, which wasn’t out yet.

—We were also surprised to hear Hikari by Utada Hikaru play just as it was in the ending.

Hasegawa: Depending on the volume of data, the sound quality of music can be drastically different. By mixing the volume of the game itself, the cutscene, and the music, it really pushed the limits of the graphics optimization.

Arakawa: Speaking of the ending, we had a lot of difficulty because the content wasn’t settled on until the very very end of development. Right on the brink of the deadline we re-watched the end of KH1 and had a discussion that went like this: “Actually such-and-such should happen,” “But we don’t have space left, it’s going to be impossible,” “We have no time either.” But one hour after that, somehow it got decided that we were going with the impossible plan (laughs). All staff went into full-mobilization mode after that.

Hasegawa: Right at that time, Nomura went to the Venice International Film Festival for Final Fantasy VII Advent Children. He told us to finish the game and he would retroactively approve it since there was no time.

Arakawa: Even though there was a chance he would reject everything when he checked it.

—Wait a minute, Nomura went to Venice right when the scheduled date for the master up was right around the corner…

Arakawa: We will leave it to your imagination (laughs).

Secrets of this title that only they know:

Kanemori:
I’ve heard people talk about all kinds of strange rules: X card has a higher chance of appearing as the first card after turning the console on, if you do Y in the right order enemy cards are more likely to appear. But, the truth is we didn’t program anything like that.

Arakawa:
When selling cards at the Moogle Shop, the moogle is stirring a pot. Just for the moment you sell a card, he starts stirring a little faster. I wanted to give him a reaction to the player’s actions.

Kando:
The 2D pixel sprites for the new Heartless and characters were all made after first creating 3D polygon models. It's a shame the polygon models for the Organization characters are unusable anywhere as they are...

Hasegawa:
When making animations for characters and enemies, basic sprites need to be drawn first. Those basic sprites were surprisingly underused in the game. Since it felt like a waste, we ended up putting them in Jiminy's Journal at the last minute.

Sign said:
The 2D pixel sprites for the new Heartless and characters were all made after first creating 3D polygon models. It's a shame the polygon models for the Organization characters are unusable anywhere as they are...
Click to expand...

I guess those unused 3D models of the Organization members from CoM were the same which later ended up making a small appearance in KH2 Jiminy's journal and more prominently in Re:CoM and KHII Final Mix. They were used after all.
You must log in or register to reply here.
Share:
Facebook Twitter Reddit Pinterest Tumblr WhatsApp Email Share Link