A Deleted Scene Pic from KH2 (it happened, but this pic in the game wasn't shown)

Location
Somewhere near the Destiny Islands

This happened, but I sure don't remember the flying heartless in the sky or having all of these guys around us.

Especially not having the scene go all the way out either. 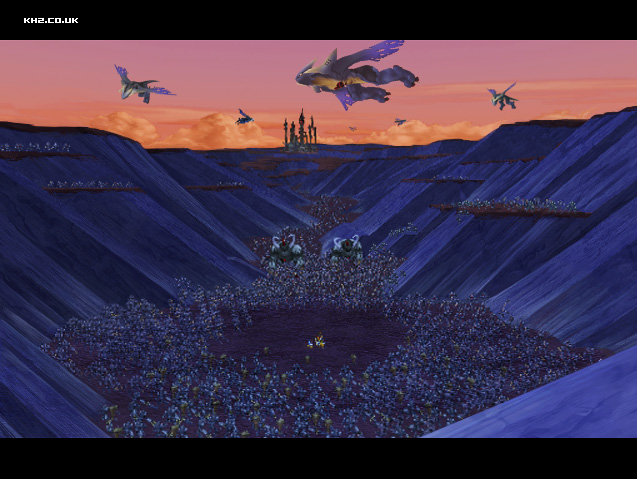 they've cut the flyin heartless out and the behemots 2. but I don't know why they did that!

They couldn't hold it all there due to disk space. The battle still happens, so just enjoy it.
Last edited: Oct 4, 2006
C

who knows maybe they will have it in KH2 FM...

Unfortunately, that scene never made it into the final product. It would have been nice to battle the behemoths again. Wyverns would have been just as enjoyable. It wasn't deleted, just altered. But like Inner- Demon stated, enjoy it anyway.
O

Thats kinda old ^^, but its not the only thing they cut/change in KHII.
Even the Axel Vs Roxas and The Sora Vs Roxas fights were changed.

Oblivion wielder said:
Even the Axel Vs Roxas and The Sora Vs Roxas fights were changed.
Click to expand...


There were MANY things that were changed. I would post pics, but it is hardly necessary in this topic.

I wish that there would be a behind the scenes selection you could earn that even lets you see deleted scenes and see how they did it. They ATLEAST even did a Behind the Scenes with the Mr. Incredible game. I hope they add that it Com Remake and KH2: Final Mix if it comes to U.S.

Location
The Ever Redundant, Super Walmart

the reason why they didnt have that in kh2, is because it wasnt in the US version. it was only done in the japan version. i dont know why they didnt for the US, but it thats just how it happened.
S

Yes, I remember seeing the Behemoth in the actual game that scene, but in the fight, they aren't there. Would have been more of a challenge, but it was just as enjoyable.

How much disk space is available on a disk anyway? o_0;;
S

Don't know why they cut that out. They've cut out lots of things in the game. But like chainlink12 said, maybe it will be in FM
S

no disk space and point of zooming that far out i guess...
S

The 1000 heartless battle would have been better if they included those.

Barxin said:
the reason why they didnt have that in kh2, is because it wasnt in the US version. it was only done in the japan version. i dont know why they didnt for the US, but it thats just how it happened.
Click to expand...


Incorrect, neither versions of the game contained the extra enemies in the 1000 heartless battle
H

The 1000 heartless battle probably would have been much harder if the Behemoths and Wyverns were added.
R

Location
Earth or in detail, The World that Never Was

The 1000 Heartless couldn't have been easier if they just had it as a cutscene, so really, what's the point of having behemoths and Wyverns if you could just reaction command them dead in three seconds?

I personally would not have minded a two-disk game. There was a lot cut out that would have been awesome to include in the gameplay. True, it may not have been enough to cover a second disk, but there was still a lot of potential for including more things. Such as, Organization XIII. There was hardly anything about it. Yes, I am waiting for KHII+ but still, there could have been more.