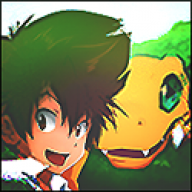 Digidork for life. · From At the end of time, listening to the drums...